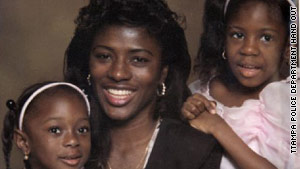 (CNN) -- For nearly 11 years, the family of Nelta Jacques has awaited word on her fate, as well as that of her two daughters, ages 5 and 7.

The three disappeared on a rain-soaked night in June 1999 as they were traveling from Jacques' father's home in Fort Lauderdale, Florida, to their home in Tampa, a drive of about 260 miles.

But a grisly discovery Wednesday in a Florida canal -- a submerged minivan with human remains inside -- might provide some long-sought answers.

The algae-covered minivan was found Wednesday morning during a Broward County Sheriff's Office training exercise at the canal, located in a wildlife management area along I-75, authorities said in a news release.

The sheriff's office has not released further details or said whether there are remains of more than one person. But Chevalier, of Port St. Lucie, Florida, said Thursday that police had notified his family that the minivan -- an older-model Dodge Caravan -- was registered to Jacques.

He said he did not know whether the remains of all three had been found, but relatives were providing authorities with DNA samples Thursday.

Jacques was 27 when she was last seen June 2, 1999. She had worked at a Wal-Mart and at toll plazas in Florida, along with other odd jobs, Chevalier said.

She had just returned from a visit with relatives in Haiti, and had picked up her daughters -- Johanna St. Louis, 7, and Juanita Jacques, 5, from her father's home. She left for Tampa, driving her 1996 green Dodge Caravan minivan, about 11:30 p.m. in the rain, despite family members' pleas not to, Chevalier said. She never arrived.

Relatives reported her and the children missing, but police had little to go on, he said. "There wasn't anything they could do. They said, 'Wait it out.'"

"She was about eight months pregnant," Dinorah Perry told the South Florida Sun-Sentinel in a story published Thursday. Perry runs Missing Children International Ministries in Pembroke Pines, Florida, and campaigned for greater police efforts in the search for Jacques. "Her father begged her not to drive that car alone. She said, 'Daddy, I'm grown.' "

The Broward Sheriff's Office said its divers routinely conduct training exercises to recover vehicles in canals. "Usually, cars that are stolen, abandoned or dumped for insurance fraud are found," the police news release said. "About 1 in 100 vehicles yield human remains."

Detectives collected evidence and processed the scene Wednesday afternoon while divers searched the water for additional remains, authorities said. The minivan was taken to the county medical examiner's office.

Before finding the minivan about 11 a.m. Wednesday, police divers had pulled two other cars out of the water without incident, the release said.

While Chevalier said he is brought to tears thinking of his relatives' last desperate moments in the minivan, he hopes the police investigation turns up no foul play.

"I hope that's what happened, they got into an accident," he said.