At least 7 arrested after raids in 3 states 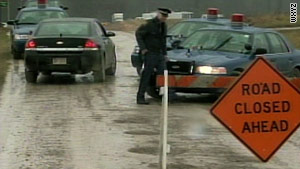 Authorities in Michigan conduct a raid on the militia known as the Hutaree.
STORY HIGHLIGHTS
RELATED TOPICS

At least seven people were arrested on charges that were under seal over the weekend, a law enforcement source said Sunday.

Gina Balaya, spokeswoman for the U.S attorney's office in Detroit, said those charges will be revealed during a federal court hearing Monday.

Mike Lackomar, a county leader for the Southeast Michigan Volunteer Militia, said the target of the raid was a Christian militia group called the Hutaree. The group proclaims on a Web site that it is "preparing for the end time battles to keep the testimony of Jesus Christ alive."

The FBI would disclose no details of the raids. The law enforcement source told CNN the arrests were unrelated to any terrorist plot. The source would not confirm Hutaree members were among those arrested, but said the suspects were not planning attacks against government targets and the raids were unrelated to recent threats against members of Congress.

At least two arrests were made in Huron and Sandusky, Ohio, but the case is being handled out of Detroit, said Scott Wilson, an FBI spokesman in Cleveland.

Lackomar, who cited the FBI for his information, said several Hutaree members were arrested at a wake for one of the group. He said the Hutaree group trained with his organization "on a couple of occasions in years past," but his group stopped about a year ago, after the Hutaree had an "issue" with federal firearms regulators. He did not elaborate.

Lackomar called the Hutaree a "religious militant group" with about a dozen members, who scattered as news of the raids spread over the weekend.

He told CNN his own group is aimed at "aiding the community in times of emergency" and had nothing to do with the raids.