After 16 years in prison, a whole new world 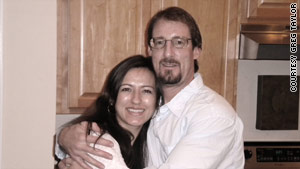 For the last month, exoneree Greg Taylor is adjusting to life at home. He's photographed with his daughter.
STORY HIGHLIGHTS
RELATED TOPICS

(CNN) -- To see the world through Greg Taylor's eyes, imagine being stuck in a time machine for 16 years and delivered to 2010.

Facebook, flat screens and DVDs are all new to him. Relationships that used to come with natural ease seem awkward.

Since 1993, Taylor, now 47, had been locked away in North Carolina's prison system for the murder of a prostitute. Last month, he was exonerated and freed.

"All that frustration and confusion I had stored up all those years was just let out," Taylor said, recalling the day he was released, February 17. "There was a lot of relief and gratitude. There was a whole lot to get used to."

He agreed to jot down his impressions and share them with CNN.

After a month readjusting to life outside prison, Taylor has concluded that Facebook is "neat but a waste of time." He's in awe that a flat, round disk called a DVD lets him rewind and fast-forward movies by just pushing a button. He finds the automatic soap dispensers in the mall bathrooms startling.

Taylor is the first man to be exonerated by a state innocence commission, which makes his case stand out from those of the more than 500 people across the country who have been exonerated by the work of private attorneys, according to the Life After Exoneration program.

The group that freed Taylor, the North Carolina Innocence Inquiry Commission, was created in 2006 after a succession of wrongful convictions were revealed. It's a one-of-a-kind program with a state-mandated panel that re-examines questionable cases, including those that don't involve DNA evidence like Taylor's.

Other jurisdictions are following North Carolina's lead, looking at creating government agencies to prevent and reverse wrongful convictions. In New York City, the Manhattan District Attorney's office launched a program this month to proactively flag common errors such as witness misidentification and false confessions before the case go to trial.

A petition filed before the Florida Supreme Court by a group of attorneys asks the state to create an agency based on North Carolina's model that will examine why wrongful convictions occur. Attorneys hope gathering useful data on eyewitness misidentifications and snitch testimony will highlight systemic flaws that need repair.

In Taylor's case, the commission considered new tests that revealed that a stain found in Taylor's truck was not blood, as the prosecutor had argued. The commission also reviewed testimony from the jailhouse informant who implicated Taylor at the trial.

By the time the commission decided to free Taylor on February 17, he had already spent a total of 16 years behind bars.

That day, he stumbled out of the courthouse without shackles for the first time. He grinned when his 26-year-old daughter embraced him tearfully. No longer a 9-year-old, Kristen Puryear had a child herself, making Taylor a grandfather.

She drove while her father sat in the passenger seat.

The post-exoneration journey is daunting for many former inmates, most of whom have spent a large portion of their adult lives in institutional settings.

The Life After Exoneration Program found one out of three inmates has lost custody of children. About 25 percent develop post traumatic stress disorder, but access to counseling and medical care is limited without employment.

Unlike parolees, who are convicted of crimes, those exonerated don't have access to corrections services.

When Taylor left prison, the state of North Carolina gave him a $45 check. It was intended to get him a hotel room and back on his feet. The amount makes him laugh.

Taylor spent his first day after his release at the mall, eager to trade his scratched plastic prison glasses for new ones. He passed a bakery where the aroma captivated him. In prison, sights and smells are muted, he explained. Inmates wear identical uniforms and eat the same tasteless cafeteria food.

"I could have stood there all day," he said.

Incarceration can also place strains on relationships with loved ones. For Taylor, it separated him from his wife and some of his closest friends.

Three days after his release, Taylor received a phone call from his childhood friend, Kenny, who had sent Taylor letters and magazines in prison but never visited.

"There was a lot of people that could not stand to see me in prison," Taylor explained.

The two friends grew up as University of North Carolina basketball fans. This spring, they reunited in front of the television to cheer their favorite team on.

Taylor's marriage was another relationship that suffered when he was in prison. His wife of 10 years, Becky Taylor, supported him throughout the trial. But several months after he entered prison, they divorced.

For their first face-to-face meeting in 16 years, Taylor's ex-wife came for dinner at their daughter's house. The conversation was cordial. She had moved to another suburb and remarried. But the comfortable ease he once felt around her had faded.

"It was the loss that hit me," Taylor said. "I just don't know her that well anymore."

But some things are just like he remembered. Taylor spent last weekend at Lake Jordan State Park, one of his favorite retreats. Before prison, he used to go boating and water ski in the summer with his daughter. This time, they sat on the lake front watching the dark, still water and inhaling the crisp air.

"It was the largest body of water I had seen in a long time," Taylor said.

After three weeks of living with his daughter, Taylor knew he needed to pull his life together. He knew he couldn't stay in his grandson's room forever.

He's looking for a car. He's gone online to build a model of the Honda Accord he wanted using the slim laptop his family bought for him. They didn't have computers that skinny in 1993, he pointed out.

He went to the barbershop for a haircut to prepare for job interviews. There, a woman cut his hair with scissors. In prison, he said, other inmates used toenail clippers to trim his hair.

Taylor says he sometimes feels overwhelmed by the daunting tasks ahead -- getting a job with medical benefits and finding a place to live. Two-thirds of those exonerated will not become financially independent, according to the Life After Exoneration Program.

Sometimes, he said, it feels as if his body is being yanked in too many different directions. His father has helped him pursue some job leads. So far, he's had no luck.

"I can't live in my grandson's room forever," he said. "When I have a routine, that's where the happiness is going to be."

But he's in no rush. He's got a daughter and grandson to get to know -- and plenty of people to catch up with.

He says he's taking it month by month.