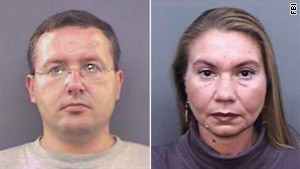 New York (CNN) -- A man federal authorities say is part of a Brooklyn husband-and-wife identity theft team has been charged with killing two of their victims.

Dmitriy Yakovlev, 42, is scheduled to be arraigned Monday in U.S. District Court in Brooklyn. The more serious charges were included in a supserseding indictment unsealed Thursday.

Yakovlev was charged with the murder of Irina Malezhik, a Russian language translator who lived in Brooklyn and worked in the federal courts. She vanished in October 2007.

He also is accused in the slaying of Viktor Alekseyev, who disappeared in December 2005 and whose remains were found in New Jersey in 2006, according to federal authorities.

A third identity theft victim, Brooklyn resident Michael Klein, disappeared in November 2003 and has not been seen since.

Julie Yakovlev was not charged in connection with the slayings but she has been accused of cashing $40,000 drawn from one victim's account, according to Robert Nardoza, spokesman for the U.S. Attorney's Office for the Eastern District of New York.

The couple was originally charged in August 2009 with illegally using the identities of three people between 2003 and 2007. Julie Takovlev is free on bail while her husband remains in custody, their attorneys said.

"Identity theft victims usually lose their money," NYPD Police Commissioner Ray Kelly said in a statement, "In this case, they allegedly lost their lives, too."

Malezhik was last seen on October 15, 2007, leaving her apartment on a security video camera. Immediately after her disappearance, the couple began withdrawing money and purchasing various items in Malezhik's name, according to court documents.

"I'm skeptical as to the foundation and nature of charges," said Ken Russo, attorney for Dmitriy Yakovlev.

Julia Yakovlev's attorney, Alexei Grosshtern, would only tell CNN that there are "no new charges" against his client. He said any charges in the superseding indictment already existed in August 2009's original indictment.