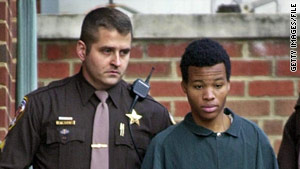 Lee Boyd Malvo is led to a court hearing in 2002. He is serving life in a Virginia prison for a shooting spree.

(CNN) -- John Gaeta received a letter of apology this week from the man who shot him point-blank in the neck at a Louisiana mall in 2002.

The shooter was Lee Boyd Malvo, the younger half of the so-called D.C. sniper team that terrorized the Southeast and the nation's capital that year. Malvo is serving a life sentence. His mentor in crime, John Allen Muhammad, was executed in November.

Though Gaeta, 58, has heard since 2006 that Malvo admitted shooting a man in Hammond, Louisiana, it wasn't until last month that he received confirmation from a pair of Hammond police officers.

"Mr. Gaeta," it read. "I am truly sorry for the pain I caused you and your loved ones. I was relieved to hear that you suffered no paralyzing injuries and that you are alive. Sincerely, Lee Boyd Malvo."

Gaeta, who read the letter to CNN over the phone Wednesday, said Malvo printed and signed his name.

Malvo was 17 when he shot Gaeta, just three months before he and Muhammad were arrested in Maryland and charged with multiple counts of murder.

Hammond Police Sgt. Brian McCormick said Malvo told him and another interrogating officer that he thought Gaeta had also been killed.

Malvo and Muhammad arrived in Hammond, about 40 miles east of Baton Rouge, on a Greyhound bus in August 2002, McCormick said.

"Muhammad told him he wanted him to shoot someone while they were in Hammond -- as a sort of loyalty test, we're assuming," the sergeant said.

Gaeta became the snipers' mark when he arrived at the mall about 8:20 p.m. August 1, McCormick said.

"The mission was to kill him," he said.

It was almost closing time, so Gaeta parked quickly and rushed into Sears to find a new pair of shoes, he said. Malvo or Muhammad slashed one of Gaeta's tires while he was inside, according to police.

Shortly after 9 p.m., Gaeta returned to his truck and started it up. He realized he had a flat and pulled under a streetlight in the mall parking lot to change it.

Two men in dark clothing soon approached him and asked whether the mall was still open. Gaeta responded that some stores were still open. The men walked off but returned about five minutes later, Gaeta said.

Watch Gaeta recall his brush with the snipers

"Do you need any help?" one of them asked.

"Looks like you have a flat tire," the other man replied, chuckling under his breath.

The men walked off again, and Gaeta didn't see them for several minutes until he went to the bed of his Chevy Silverado to retrieve the spare tire.

From there, he saw a shadow slinking alongside his truck. Gaeta looked closer, he said, and saw a figure dart to the front of his vehicle.

Thinking teenagers were playing a prank, he met the figure on the other side of the truck and asked flatly, "What are you doing?"

Malvo came around the door, made eye contact with Gaeta, produced a .22-caliber revolver and shot him from a distance of about five feet.

The bullet pierced Gaeta's neck and exited his back, just below the shoulder. He first thought of his wife, his family and his friends, but it was his second thought that saved his life.

"I knew that unless I fell to the ground, he would be shooting me again," Gaeta said, explaining how he played possum while Malvo snatched the wallet from his pants pocket.

After Malvo and Muhammad fled, Gaeta ran to a service station. He wasn't in much pain and thought, again, it could have been a prank. He told witnesses at the service station he might have been shot with a paintball gun.

"But sir, you're bleeding," they said.

Gaeta went to the hospital, where doctors told him he had dodged damage to his spine and arteries. He was released in about an hour, making him one of the more fortunate of the D.C. snipers' 13 confirmed victims, at least 10 of whom died.

I was relieved to hear that you suffered no paralyzing injuries and that you are alive.
--Lee Boyd Malvo
RELATED TOPICS

He began to open up upon learning the news and told the Hammond police, according to McCormick: "Back then, I was brainwashed by Muhammad and he made me do everything that I did."

Gaeta said he intends to forgive Malvo and plans to send him a letter, though he bristled at the thought of becoming pen pals.

He said he would like to know what Malvo would do differently if he could relive the past decade. He also wants to press him on how he'd feel if someone shot one of his loved ones, Gaeta said.

He'd like to see Malvo prosecuted for shooting him, but police say it's unlikely. Malvo already has no chance of parole, and McCormick said Malvo also faces a murder indictment in Baton Rouge for the September 2002 slaying of Hong Im Ballenger.

"I doubt we'll ever get him to Louisiana to prosecute him," McCormick said. "If we do, Baton Rouge will get him first."

It may seem odd that two Hammond police officers would travel more than 600 miles to Pound, Virginia, for a confession that might never see a courtroom, but McCormick says it's worth it because their victim gets closure.

And though Gaeta said he has long suspected Malvo was the shooter, Malvo's confession erased any "shadow of a doubt" that his attacker is locked away, never to walk free again.