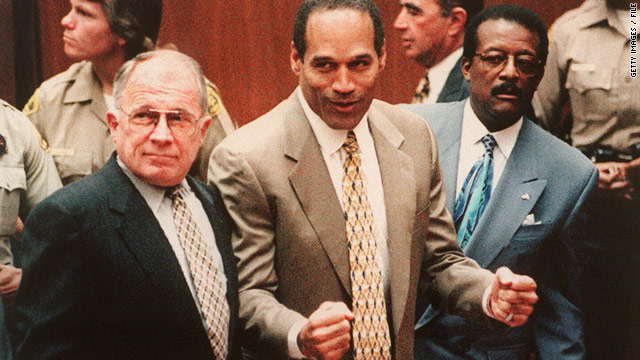 The Smithsonina Institution has said no to an offer to add O.J. Simpson's 1995 acquitall suit to its collection.
STORY HIGHLIGHTS

A day earlier, a California judge approved an agreement to donate the brownish-green suit O.J. Simpson wore the day in 1995 that he was acquitted of murder -- if museum officials wanted it. But they didn't.

"The curators feel that it doesn't fit with the collections here at the National Museum of American History," Valeska Hilbig, spokeswoman for the museum, told CNN Radio Tuesday.

The museum houses iconic memorabilia, such as a pair of Judy Garland's ruby slippers from "The Wizard of Oz," the hat Abraham Lincoln wore the night he was assassinated and a piece of a lunch counter from a Woolworth's in Greensboro, North Carolina, that was the site of a civil rights sit-in.

The museum on the National Mall in Washington is also home of the original "Star Spangled Banner," which inspired poet Francis Scott Key to pen the lyrics to what would become the national anthem.

The agreement to donate the suit ended a years-long battled between Fred Goldman, the father of the man the ex-National Football League star was accused of killing, and Simpson's former sports agent, Mike Gilbert, who has possession of the suit.

But no one checked with the Smithsonian before making the announcement. Hilbig said there was no official offer to donate the suit and that officials learned of the potential deal on the Internet.

With the Smithsonian's rejection, the parties will look for another museum to take the suit, per the Los Angeles County Superior Court order on Monday.

"I suggested to go back to USC (the University of Southern California, where Simpson starred in college football), even though they've distanced themselves, or maybe the Pro Football Hall of Fame museum," said Simpson's attorney, Ronald Slates, who said he was disappointed in the Smithsonian's decision.

"We had worked six hours on Monday to reach the settlement, and to find the finest museum in America turning down what is truly a piece of highly controversial litigation in the United States -- it was very disappointing," he said.

"Of all the museums in the United States, this would be the one most open because it is our national museum," he said. "It deals with the ups and downs of America. You don't see the Smithsonian walking away from days of the Depression -- which were certainly horrible days in our history -- because it was so horrible. So, I thought this would be the museum to house this, even as controversial as it is."

Simpson stood trial on charges of stabbing to death his ex-wife, Nicole Brown Simpson, and Fred Goldman's son, Ronald, outside her luxury townhouse in Brentwood on June 12, 1994.

The trial lasted more than nine months and ended on October 3, 1995, with a jury finding Simpson not guilty.

Later, the families of Brown and Goldman took Simpson to civil court to seek damages for wrongful death.

That jury found Simpson liable for the deaths and awarded $8.5 million in compensatory damages to the Goldman family and to Ron Goldman's biological mother.

Since then, Fred Goldman has been trying to collect the money. Simpson has consistently said he did not kill the two and should not have to pay.

In 2008, Gilbert appeared on the "Dr. Phil" television show, claiming he had the suit and pants Simpson wore on the day of the acquittal. He also said the "acquittal suit" -- as it came to be known -- was worth $50,000.

Monday's decision, said Goldman, "takes any option out of the killer's hands or Gilbert's hands to sell it and make money on it."

Meanwhile, Simpson, 62, is serving a nine-year sentence in Nevada after his conviction on robbery and kidnapping charges in an unrelated case.

The case involved a botched attempt in September 2007 by Simpson to retrieve items that he said had been stolen from him by memorabilia dealers.