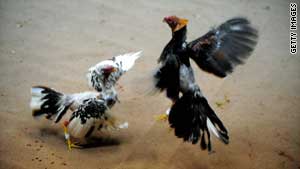 At least four law enforcement officers were in the crowd at a Kentucky cockfight, the Humane Society says.
STORY HIGHLIGHTS
RELATED TOPICS

(CNN) -- Two roosters tear at each other in a fenced ring in a recent match in Kentucky.

But even more shocking than the illegal fight in the ring may be who was in the crowd watching, says the Humane Society of the United States.

"Cockfighting is a cruel blood sport that is illegal in Kentucky and every other state," said John Goodwin, manager of animal fighting issues for the group. "Kentucky police officers should not treat this criminal activity with a wink and a nod, and it's another sign that state lawmakers must act to strengthen the penalties for cockfighting."

As the roosters thrash at each other, the camera pans to the crowd of dozens gathered, cheering for the birds. At least four law enforcement officers can be seen in the crowd, including a Kentucky state trooper who was talking to a young boy.

Kentucky Gov. Steve Beshear released a statement about the video.