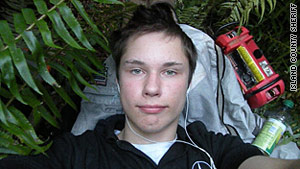 Police say they found this self-portrait of Colton Harris-Moore in a camera left in a stolen car.
STORY HIGHLIGHTS
RELATED TOPICS

Seattle, Washington (CNN) -- Authorities have a familiar suspect in the theft of a plane that alarmed air traffic controllers when it flew near airspace restricted for the 2010 Vancouver Olympics: They're looking for "the Barefoot Burglar."

Investigators say it's the fourth plane they believe Colton Harris-Moore has stolen and flown away, despite the fact that he is only 18 and does not possess a pilot's license.

The plane, a Cirrus SR22 worth about $650,000, was undamaged even though it came to rest in mud near a landing strip on Orcas Island, off the Washington coast, said Allen Kenitzer, a Federal Aviation Administration spokesman.

Previous plane thefts of which authorities accuse Harris-Moore resulted in thousands of dollars in damage to the aircraft.

Harris-Moore has not been charged in the plane thefts, but he faces at least 11 charges for driving a stolen car, Internet identity thefts and burglaries.

He is alleged to have committed some of the crimes barefoot. That earned him the nickname that has become part of the lore surrounding the young fugitive in the small Camano Island community where he grew up.

Investigators have received reports that Harris-Moore has lived in the woods and in other people's homes. They do not know where he is, but they're looking for him -- and trying to determine whether someone is helping him.

'Barefoot burglar' takes to the skies

"He will typically break into a home or vehicle and copy down the credit card numbers," Island County Sheriffs Department spokesman Ed Wallace has said. "He then leaves the credit cards behind so people don't realize they have been stolen."

When Harris-Moore wasn't squatting in homes, he took to the woods with survival gear to elude police, they said. He's been known to hide in the trees.

In 2008, Harris-Moore went from being a convicted serial burglar considered to be a nuisance by residents and police to an outlaw making international headlines after he broke out of a juvenile halfway house shortly before someone started stealing and crashing planes.

Time magazine, in a December dispatch, dubbed him "America's Most Wanted Teenage Bandit."

"It should be more about the apprehension of an adult felon criminal and not so much about everything else making this person into a Robin Hood or cult hero," Brown said.

Harris-Moore's mother, Pamela Kohler, has not responded to questions about the latest incident. Earlier, she told CNN affiliate KIRO that she wanted her son to turn himself in. She said she was "proud" if her son had actually taught himself to fly.

In October, police called Harris-Moore a suspect in the theft of a plane from Idaho that crash-landed in a clearing northeast of Seattle. Since then, there have been no solid leads on Harris-Moore's whereabouts.

Orcas Island, a 57-square-mile island with a population of about 4,500, is mainly known as a hub for whale-watching tourists.