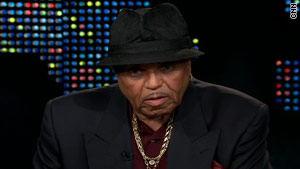 Joe Jackson says he believes Dr. Conrad Murray is "a fall guy" in a conspiracy and that son Michael was murdered.

Los Angeles, California (CNN) -- Michael Jackson's father suspects his son was murdered and that Dr. Conrad Murray is "just a fall guy" in a conspiracy.

Joe Jackson appeared on CNN's "Larry King Live" on Monday night, just hours after sitting in a courtroom to hear Murray plead not guilty to a single charge of involuntary manslaughter in his son's death last summer.

A Los Angeles judge set bail at $75,000, despite arguments from the prosecutor that Murray is a flight risk and needs a higher bail. Murray posted the bond and was released several hours later.

Michael Jackson's family, including his parents, four of his brothers and one sister, filled the first two rows of the small courtroom.

"I was looking for justice, and justice, to me, would be a murder charge," Joe Jackson told King.

Prosecutors charged Murray, who was Jackson's personal physician, with causing the pop star's death "without malice" by acting "without due caution and circumspection."

The Los Angeles County coroner ruled Jackson's death a homicide, resulting from a combination of drugs, primarily propofol -- a powerful anesthesia -- and lorazepam.

Joe Jackson suggested it was more than a doctor making a fatal judgment.

"To me, he's just a fall guy," Jackson said. "There's other people, I think, involved with this whole thing. But I think that he's interrogated -- he would come clean and tell everything he knows."

He said Michael Jackson told his mother, as he was preparing for his comeback concerts in London, England, last year, that he thought he would be killed.

"He was afraid to even do all of these shows, because he was afraid that he wouldn't get a chance to finish all of the show," Joe Jackson said. "He couldn't do all those shows back-to-back. Even his kids say that he had told them that he would be murdered."

Jackson family members later reacted to what they saw in the courtroom:

The doctor stayed with Jackson as an ambulance rushed him to UCLA Medical Center. Efforts at CPR proved fruitless, and Jackson was pronounced dead at 2:26 p.m.


CNN's Stan Wilson and Ted Rowlands contributed to this report.