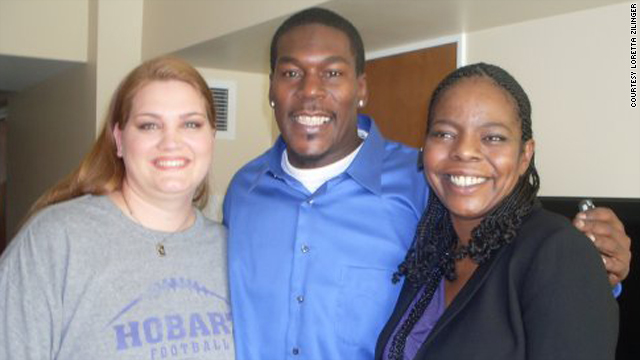 (CNN) -- For 16 years, Loretta Zilinger loathed Dean Cage for what she believed he did to her when she was 15 years old.

Dressed in her immaculate Catholic school uniform, she was on her way to class in October 1994. She heard footsteps coming up behind her. By then, it was too late.

A tall man attacked her, hauled her into an empty building and threatened to kill her. She kept her eyes open as he performed sex acts on her. She used her hands to touch his face; her fingers traced his nose, his eyes and his lips. She wanted to remember him.

Several days later, Chicago police brought her into the meat market where Dean Cage, a tall black man, worked. A police officer instructed her to identify her attacker by gently tapping the officer's arm.

Instead, she wailed frantically.

She pointed at Dean Cage.

Cage, then 26, was shocked when the police arrested him.

That didn't matter. Two years later in 1996, Zilinger's testimony would convict Cage, sending him to prison for 40 years. Zilinger was absolutely sure. Even his voice sounded like her attacker's, she said.

After four appeals and 14 years in prison, Cage won his freedom. A sample of the assailant's saliva, retrieved from the victim's body in 1994, was the proof he needed. A DNA test, which was not available at the time of the trial, was performed on the saliva and excluded him.

Part 1: A test of convictions
Part 2: Starting over

He was determined to start a new life with his family. He hadn't been able to be the husband, father and son he wanted to be during his years in prison. He had postponed wedding his fiance and missed his sons' graduations. When his elderly mother fell ill, he couldn't care for her.

"I thought, 'How could this person say these terrible things about me?' " Cage said. "The people I hung around knew what kind of a person I was, that I wasn't a rapist."

Cage was freed from a state prison in Canton, Illinois. Several hundred miles away in Hobart, Indiana, Loretta Zilinger learned the news of his release. She was petrified.

"The first thing I asked [the prosecutor] was to ensure my family would be safe," she recalled.

She cried at work when she learned about the news. She cried in the car ride home. She locked herself in her room and cried some more.

She was convinced the DNA test was all wrong. She was told by the assailant to rub dirt on her naked body, which could have skewed the DNA results, she reasoned.

Meanwhile, Cage's exoneration made the local news. She read comments on news Web sites that called her a terrible person for putting an innocent man with a family behind bars. She ran into people who knew about her ordeal and told her, "It's your fault."

She was angry at her attacker. She spent years in counseling sessions that ate away at her family's savings. She managed to graduate from high school, and then college, despite the nightmares that disturbed her sleep.

The sexual assault affected her relationships with her stepfather and her husband. It was hard to trust men, even her four little boys.

Now that Cage was free, she prayed he would stay away from her.

In November 2009, Zilinger, 31, packed her bags and headed for Los Angeles, California. It was her first visit.

She was going to share her ordeal with the world on the syndicated "Dr. Phil" show. She agreed to appear on behalf of rape victims like herself, who were too scared to speak up.

But Zilinger had no idea the show would offer her the chance to face the man she thought attacked her. During the taping, host Phil McGraw, a psychologist, explained the DNA tests to her.

Then, the show offered to let her meet Cage the next day.

Filled with anger and grief, Zilinger said she would have to think about it. She was still confident Cage's DNA results were incorrect.

Later that night, after talking to her husband of 10 years, she changed her mind. Zilinger's husband had worked as a police officer in Indiana for almost eight years. He knew witnesses made mistakes and that DNA tests were highly accurate.

That conversation was the first time the couple had really discussed the rape. For all those years, Zilinger had kept the attack to herself.

"I eventually knew I had to face him," she said. "I felt guilty that I was responsible for all the years he spent in jail."

It was Cage's first time in Los Angeles, too. The 43-year-old thought he was doing another interview about his exoneration. He didn't expect to see his accuser there.

His two years of freedom with his family had changed Cage. The resentment he held toward Zilinger had faded. He had goals, like finding a job and raising his 3-year-old granddaughter.

The attacker, who has not been found, had ruined both their lives, he concluded. They were both made victims.

On the show's stage, Zilinger and Cage embraced

"I hope you get the closure, and I hope you can find the person who did this," he said to her.

"Can we help each other?" Cage responded.

Zilinger and Cage are sharing their story to help exonerated people and victims who have misidentified their assailants. Most victims truly believe the exonerated person is guilty despite DNA evidence, according to experts who study wrongful convictions.

They plan to start an organization to educate groups about wrongful convictions and spread their message of forgiveness.

"She was sincere in her apology," Cage said. "I knew it was the right thing to do."

For the first time since the attack, Zilinger no longer lives in fear. She feels at peace, like she has closure, and she wants to help other women reach that point.

"I realized I can't always call myself a victim," she said. "I have to start calling myself a survivor."

She has asked the Chicago Police Department to reopen her case. She wants the DNA evidence that freed Cage to find her attacker.

Since the original taping in November, the two have had lunch together. Cage has met with Zilinger's brother, who is helping him find a better-paying job. Since his release, re-integration into society has been harder than Cage expected. He works a minimum wage job at a barbeque joint to earn rent money for his family.

Things are looking up, though. His wedding has been delayed for 16 years, first by his wrongful arrest in 1994 and recently by the rocky economy.

But Cage plans to marry his fianceé in May -- and he has already invited Zilinger.