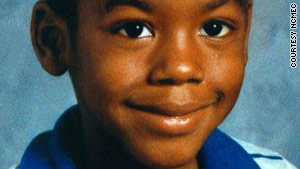 Jamal Abdul'Faruq was 7 when he disappeared on April 16, 1990. His brother's body was found in a landfill.

New York (CNN) -- Basil Abdul'Faruq and his brother, Jamal, begged their mother to let them go outside to play. It was spring break, April 16, 1990, and the boys wanted to join other kids in their Richmond, Virginia, neighborhood.

Their mother, Tambar Ellis, was tired after working the night shift at the nearby DuPont factory. She didn't worry about Basil, 8, and Jamal, 7, playing outside. They walked to school on their own every day.

It was the last time she would see her children. She said she took a short nap, about 30 minutes. Then she walked outside to call the boys in for dinner.

"I called them, and I didn't get a response," she said. She searched the grounds surrounding the 600-unit apartment complex and then a playground about a block away.

As the minutes passed, she started to panic.

"After about maybe four or five minutes of looking for your kids, you go through a wave of a different emotions," Ellis said. "You know they're not up in someone's house, because they knew I wouldn't have allowed it. ... I couldn't believe they weren't within hearing distance."

Ellis continued to call out to her sons for nearly 45 minutes.

She checked a convenience store at the front of the complex. They weren't there.

Search dogs, law enforcement officers and volunteers canvassed the neighborhood. Helicopters surveyed the area from above.

"I was in the Army Reserves at the time," Ellis said, "so a lot of soldiers were looking from my reserve unit."

The search continued into the night, and the following day and the day after that.

On the third day, Ellis and the boys' father, Everett Abdul'Faruq received devastating news. The body of their oldest son, Basil, was found 10 miles from home in a Chesterfield landfill. A truck driver noticed the body protruding from a torn plastic garbage bag.

The boy's mouth had been gagged and his body bound with duct tape, said Detective Johnny Capocelli of the Chesterfield Police Department. He'd been stabbed twice in the back, and his skull was fractured.

"I never saw my son's body," Ellis said. "They recommended that I not see his body."

The medical examiner determined that the stab wounds killed Basil. The skull fracture occurred after he died, an autopsy showed.

"It started off as a missing persons case with us," said Richmond Police Detective James P. Baynes, "and then became Chesterfield's murder case."

Although Basil's death was ruled a homicide, police were left without a suspect and without any clues leading to Jamal.

"After they found Basil, they spent at least a day going through all of the rest of the trash in that dump, poking the bags," Baynes said. Investigators identified the truck that carried Basil's body to the dump, but the lead went nowhere.

As with most missing child cases, investigators turned their attention to the boys' parents. They seized duct tape and other evidence from Abdul'Faruq's home. But both parents were eventually cleared.

"They've been very cooperative from the very beginning," Capocelli said.

He declined to identify what, if any, additional evidence was collected in the murder investigation.

Now, he says, law enforcement has access to a DNA database that could prove helpful.

"Our state lab has agreed to look at the duct tape that was found on [Basil]," Baynes said. "They're going to test it to see if they can find something they couldn't find when the boys went missing, anything that is separate from Basil's DNA."

Investigators are hopeful the DNA tests will lead to answers. They also are eager for credible tips.

"We got two tips saying Jamal was alive and he was living in Hinesville, Georgia," Baynes said.

The anonymous tips, received in June, came after the boys' story aired on "America's Most Wanted." The broadcast featured an age-enhanced photo showing what Jamal might look like at 26 years old.

"Someone saw a person in Wal-Mart that looked like the enhanced photo they had seen on TV," said Maj. Thomas Cribbs of the Hinesville police. Detectives reviewed the Wal-Mart surveillance tapes but were unable to substantiate the caller's identity.

"There wasn't anyone we could connect with," Cribbs said. "We had nobody to go back and talk to, to ask them, 'Where did you see this person? What can you tell me?' "

Capocelli believes that Jamal may still be alive. Baynes agrees.

"I think there's a strong possibility that Jamal's alive, and I think we will find the person who's responsible," Baynes said.

Ellis holds out hope every day that her son will be found.

"You hear of Jaycee Dugard," she said. referring to the California woman who was abducted at age 11 and found alive last year, 18 years later.

"Anything is possible. I don't give up," she added.

"I had my theory about why one [boy] was found ... that Basil was trying to protect him," Ellis said. "They were protective of each other."

"Detective Baynes has been working countless days and nights," Capocelli said. "I can tell you from all my years of cold cases, this is never going to be one that sits on the shelf and gathers dust."

When he disappeared, Jamal was 4 feet tall and weighed 47 pounds. He was wearing a black Batman T-shirt, jeans and white sneakers.

Detectives ask anyone with information concerning the case to contact Metro Richmond Crime Stoppers at (804) 780-1000.