No parole for 'Angry Betty' Broderick 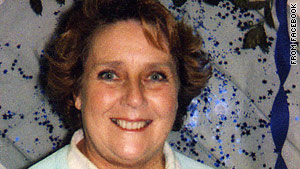 Betty Broderick has been in prison since 1991 for shooting her ex-husband and his new wife to death.

(CNN) -- Elisabeth "Betty" Broderick, once a socially prominent lawyer's wife who fatally shot her ex-husband and his new wife in bed in 1989, has been denied parole.

When Broderick's husband of 16 years dumped her for his young legal assistant, she seethed with a white-hot fury. She was one angry Betty, as a California writer, a long-time Broderick watcher, recently observed.

She still is, the California parole board concluded Thursday after hearing Broderick's rambling statement in which she continued to blame her actions on her husband's extramarital affair and their bitter divorce.

"I allowed the voices in my head to completely take over," Broderick told the parole board. "I took the lives of two wonderful people who were loved by many."

Yet when pressed for details on her actions, Broderick repeated what she had said during her trials: "Linda came at me and the gun went off."

"She was totally not remorseful, didn't even try," said Richard Sachs, a San Diego prosecutor who handles so-called "lifer hearings." Broderick won't be eligible for another parole hearing for 15 years -- the maximum time the law allows.

It was the latest chapter in a marriage that went off the rails because of a wife's bitterness over a straying husband's office romance.

After Broderick's husband, Dan, left her for his legal assistant, she covered the interior walls of his house with black spray-paint and drove her car through his front door. She left angry, obscenity-laced tirades on his answering machine. Then she crept into his bedroom early on a Sunday morning and shot him and the other woman, by then his wife, to death.

When she was arrested and tried in the early 1990s, Broderick said she was the victim, telling a tale that resonated with many wives who feared being replaced by younger women. Court-watchers broke into two camps, known as Betty-boosters and Betty-bashers.

Now 62, Betty Broderick has been in prison longer than she was Mrs. Daniel Broderick. Her failed bid for parole brought back a strong emotions over a case that spawned several books and two made-for-TV movies starring Meredith Baxter, the mom from the hit series "Family Ties."

It was the first time she had become eligible for release for the 1989 murders of Broderick, 44, and his wife of seven months, Linda Kolkena Broderick, 28.

Dan and Linda Broderick's friends and family were out in force to voice their opposition. The Brodericks' four children remain divided over whether she should go free.

Dan Broderick's brother, Larry, said Betty Broderick's sob story portraying herself as the victim was a tissue of lies. He told CNN she made up stories about her ex-husband and his new wife during her two trials in the early 1990s.

True or not, the story Betty Broderick told was so compelling it took on a life of its own. It apparently did not withstand the test of time as she went before the parole board. Hindsight tends to paint a sharper -- and harsher -- picture.

Betty's version: She was a stay-at-home mom who worked to put her husband through medical and law school only to lose her "Ward and June Cleaver" marriage when her husband fell under a younger woman's spell.

Larry Broderick's story: No, she did not put her husband through school. No, they did not have an idyllic marriage. "Normal people just don't seem to get that murderers will lie to save their skin," he told CNN. "And, did you know that dead people have no rights? A person can slander and libel and say anything they want about a dead person, and you can't stop it."

"What the public sees is the older woman dumped for the younger woman, and they get upset about that and forget all the rest," prosecutor Sachs said.

These facts were never in dispute:

What the public sees is the older woman dumped for the younger woman, and they get upset about that.
--Richard Sachs, prosecutor

During a bitter and protracted divorce, Daniel Broderick won full custody of their children and married Linda Kolkena in April 1989.

Seven months later, armed with a .38-caliber pistol, Betty Broderick walked into the couple's bedroom and fired five times. Linda Broderick died instantly. Dan Broderick was shot in the chest and died more slowly as his lungs filled up with blood. Betty Broderick ripped the telephone extension from the wall so he could not call for help, according to testimony.

Asked at Thursday's hearing why she then didn't commit suicide, as she said she'd planned to, Broderick responded, "I didn't have any bullets."

Other facts seemed to have been lost in the drama. Broderick had bought the gun a month before her husband remarried. She practiced shooting. She made threats. And, she took her daughter's key to sneak into a house that, under a restraining order, she was forbidden to enter, according to testimony.

Two murder trials -- the first ended in a hung jury -- focused on Betty Broderick's state of mind. The courtroom drama was a wronged woman's dream.

According to testimony, Broderick long suspected her husband was having an affair, which she confirmed when she tried to surprise him at the office on his birthday and learned he'd spent much of the day with his legal assistant. In a rage, she threw his clothes into the yard, doused them in gasoline and set them ablaze.

She said Dan Broderick abused her and then used his legal connections to crush her as their marriage broke up.

"The family hates these lies because Dan was about as honorable and wonderful a guy as you would want to meet," said his brother Larry. "There are hundreds of people out there who feel the same way about him. All he wanted to do was get away from this woman."

A former president of the San Diego Bar Association, Dan Broderick was so well regarded in the legal community that the library of the Bar Association building was re-named the Broderick room after his death.

All he wanted to do was get away from this woman.
--Larry Broderick, victim's brother
RELATED TOPICS

Betty Broderick's diaries were read in court, and Dan's answering machine tapes were played -- including one in which their son pleaded with his mother to stop using "bad words" about his father. The couple's oldest daughter, Kimberly, testified that her mother told her she hated the girl's father and wished the children had never been born.

Betty Broderick alleged that her ex-husband penalized her for her outbursts, deducting hundreds of dollars from support payments. She said he used a little-known legal clause to sell her house without her signature.

"Any time you've got these things going on, people are not at their best, honestly," prosecutor Sachs said. But he said he believes Betty Broderick turned to violence because she just couldn't get over it.

"The part that nobody sees is it was already five years later on the timeline," Sachs said. "She's getting 16 grand a month and a nice house in La Jolla, and it's time to move on."

She testified at her 1990 murder trial that she only wanted to talk to her ex-husband and then "splash my brains all over his house," but fired at the couple because she feared they'd call the police.

"They moved, I moved and it was all over," she testified, according to news accounts of the trial.

Mental health experts for the defense said Broderick was depressed; prosecution experts said she was a narcissist.

Broderick's retrial, among the first cases carried on Court TV, resulted in guilty verdicts on two counts of second-degree murder. It was a compromise verdict because jurors couldn't agree that the killings were premeditated.

In several media interviews after the trials, Broderick continued to portray herself as the victim. "It wasn't like I planned to kill somebody and now I'm sorry," she told the Los Angeles Times after her conviction in 1991.

Broderick received consecutive sentences of 15-years to life in prison, with an additional two years for a gun conviction. CNN attempted to reach Broderick through her supporters but she did not respond.