Waiting for a 'good girl' to come home 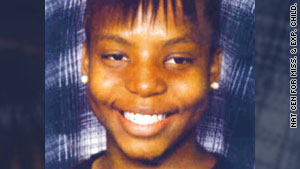 Kimberly Arrington was 16 when she disappeared October 30, 1998, in Montgomery, Alabama.

New York (CNN) -- Kimberly Arrington was 16 when she disappeared more than a decade ago, and her father still waits for her to come home. So does a little girl she never met who carries her name.

Walter Arrington remembers "a good girl" who enjoyed listening to music, dancing and learning computers at school, where she was well-behaved.

"I've been going through this for the last 12 years, and I feel like this might be my last chance of ever seeing my daughter or somebody recovering her," he said, hoping a story would compel someone to come forward.

Someone may have asked his daughter for directions, Walter Arrington believes, and forced her into a car as she walked to a CVS pharmacy near her home Montgomery, Alabama, on the day before Halloween, October 30, 1998.

"Most people liked her, and she was very friendly towards everybody,'' he said. "I felt like maybe that's part of the reason why they got her.''

Walter Arrington was leaving for work the last time he saw his daughter. She was already talking about Christmas, he said, asking about her gifts. That's the picture that stays in his mind.

"I can hear her talking and see her talking from that day now,'' Walter Arrington said. "And I can't go on any further, because I'm at a standstill until I find out what happened to her. ... It is something that I carry with me every day.''

Kimberly Arrington left the family's home about 5 p.m., telling her mother where she was going, according to police. And then she simply vanished.

"It wasn't easy for her, either,'' Walter Arrington said, recalling that one of the last things his wife asked was whether he will continue to look for Kim.

Whatever her fate, Kimberly Arrington's name lives on. Six years ago, her sister Jennifer named her daughter Kim, after her missing aunt. The girl, who knows that her mother's sister is missing, often asks when she's going to meet "Auntie Kim."

Her disappearance remains a mystery with few clues and no strong leads, according to investigators in Montgomery.

Despite dozens of interviews with family, friends, classmates and city residents, no viable witnesses were found in the days, months and years that followed, said Capt. Keith Barnett of the Montgomery Police Department.

"We had nobody that saw her get snatched up. Nobody found her purse or jacket or anything on the side of the road,'' Barnett said. "She just disappeared. She left home and disappeared.''

Whether Arrington made it to the pharmacy after she left home shortly after 5 p.m. will probably never be known. No credible witnesses came forward, and there was no surveillance video from the store.

"For an older girl to be abducted and vanish -- if that's what really happened -- would be unusual,'' Barnett said.

He explained that most abductors target a younger child because they're ''easier to manipulate, to get in the vehicles, easier to control.'' Sixteen-year-olds such as Arrington would put up more of a fight because they're stronger, he said.

Known sex offenders in the area were questioned, and police looked into rumors and speculation. Still, a suspect was never found.

Police canvassed the area from Arrington's house to the CVS store, searching for signs of struggle and belongings she may have dropped.

But they came up empty-handed.

"It'll never be closed until she's located one way or another, however she's found,'' he said, adding that the department will look into any tip.

Because her DNA is not available, police have sent samples from her father and one of her sisters to a national database.

In the hours after she vanished, Arrington was considered a runaway, which is indicated on the police report.

"All we thought we had was possibly a girl that left home for a few hours to be with friends, boyfriends or whatever and was coming back home,'' said Lt. Rickey Fennie, who is now in charge of the investigation.

"But it didn't take long for us to realize that probably was not the case.''

Asked whether time or crucial opportunities to find her may have been lost, Barnett said: ''Unfortunately, at the initial time of the report, we had no information or evidence from anyone, including the parents, that pointed at foul play being involved.''

Barnett says there was a two- to three-hour delay when Arrington's parents reported her missing because they had gone looking for her on their own.

"So, no, I do not feel that any vital leads were missed, because all the proper actions were taken as soon as it looked as if this might be more than a runaway,'' he said.

According to the missing-person posters, Arrington was 5'4'' and 110 pounds. She was wearing a gray Bugle Boy shirt with a collar, light blue jeans and white Reebok sneakers with gray trim. She has a scar on her stomach. Now she would be 27 years old.

Anyone with more information about Arrington's disappearance is asked to call the Montgomery Police Department at 1-334-241-2790 or the National Center for Missing & Exploited Children at 1-800-THE-LOST.