British Airways head lashes out at 'redundant' US security demands 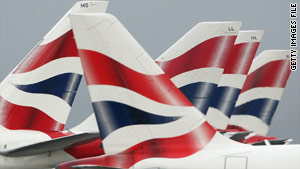 London, England (CNN) -- British airlines should stop "kowtowing" to American security demands like making passengers take off their shoes and remove laptops from carry-on bags, the chairman of British Airways argued at an industry conference.

He also criticized the United States for demanding tighter security on inbound international flights than they do for U.S. domestic travel.

"America does not do internally a lot of the things they demand that we do," he said. "We shouldn't stand for that. We should say, 'We'll only do things which we consider to be essential and that you Americans also consider essential.'

"We all know there's quite a number of elements in the security program which are completely redundant and they should be sorted out," he said.

"These off-the-cuff comments by an individual representing a private, for-profit entity in no way reflect the close working relationship between the U.S. and the U.K. and are not indicative of the cooperative security efforts enjoyed by our two nations," the official said. "These comments are simply out of touch with current intelligence-driven security policies."

But other industry executives were quick to support the British Airways executive.

America does not do internally a lot of the things they demand that we do.
--Martin Broughton
RELATED TOPICS

"There will no doubt be widespread agreement," said the head of the Board of Airline Representatives in the United Kingdom.

"It is about time the industry stepped back and had a look at what is really required and what we can do without, ensuring safety is not compromised," Mike Carrivick told CNN.

He said the industry should take "technological advances" into account when examining the "layer upon layer" of security measures that have been added over the years.

"For the passengers, it's a tedious experience to queue for security, and if there are measures that don't need to be there, they shouldn't be. It's good for someone to challenge the industry," he told CNN.

"I have listened to your concerns regarding the need to reform the regulatory framework for aviation security," he said Monday at the same conference where BA's Broughton was speaking.

"And I intend to develop a new regulatory system, one where the government concentrates on setting the security outcomes that need to be achieved, and frees up operators to devise the security processes needed to deliver them in line with EU requirements," he said.

The United States Transportation Security Administration said it "works closely with our international partners to ensure the best possible security. We constantly review and evolve our security measures based on the latest intelligence."

A TSA official said: "screening shoes increases security at the checkpoint. Shoes remain a security concern because items may be hidden within the shoe and therefore they must continue to be thoroughly screened. Screening shoes by X-ray is an effective method of identifying any type of anomaly, including explosives."

"Travellers are in favor of anything which will make security checks faster, but they need to feel confident that safety measures have not been compromised too," said Barry Smith, Skyscanner's co-founder and business director, citing passenger surveys conducted by the website.

"There is no one single solution to aviation security and we strongly agree that there should be common international standards," Smiths President Stephen Phipson told CNN.

"These standards should help ensure consistency of security measures, airport efficiency and customer experience," he said.

Airports began asking passengers to remove their shoes for scanning after Richard Reid, a passenger on a flight from France to the United States in December 2001, hid explosives in his shoes in a failed attempt to blow up a plane.

Large quantities of liquid were banned from cabins in 2006 after British authorities broke up what they said was a plot to use liquid explosives to bring down U.S.-bound planes.

And airport security authorities have feared for decades that explosives could be hidden inside electronics, going back to the days of the Walkman.