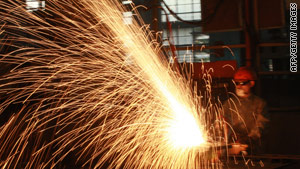 Beijing, China (CNN) -- China's economy grew by 8.7 percent in 2009, according to the National Bureau of Statistics.

The gross domestic product total was $4.9 trillion in 2009. The annual growth was spurred by a $586 billion stimulus package to bolster its economy.

The government had set a growth target rate of 8 percent last year, which the government sees as a benchmark to maintain employment rates in the nation of 1.3 billion.

"In the face of severe impact brought about by the global financial crisis in a century and the most complicated domestic and international situations, the (government) sized up the situation, made scientific decisions, and headed the whole nation united as one to surmount the difficulties of our time," said Ma Jiantang, director of the National Bureau of Statistics. "It stopped the remarkable decline ... and China became the first to emerge (from the recession)."

Retail sales rose 16.9 percent in 2009, as China encourage domestic spending to make up for lost export business during the recession.

But concerns are rising of a growing property bubble in China, fueled by lending which has seen property prices grow 50 percent or more in some cities.

The sector was also hit by reports that China intends to slow the pace of lending this year in an attempt to get ahead of inflation. A stronger dollar also pressured dollar-traded commodity prices and stocks.

"China's efforts to get their banks to lend less really hit commodities hard, because China is the marginal buyer of commodities," said David Chalupnik, head of equities at First American Funds.

Monthly import-export numbers for December 2009, however, were up.