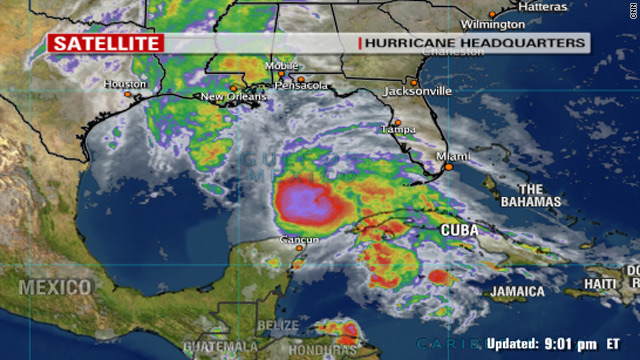 (CNN) -- Hurricane Ida moved into the southern Gulf of Mexico Sunday, prompting a declaration of emergency in Louisiana and concern along the U.S. Gulf Coast.

The storm regained hurricane intensity overnight Saturday, becoming a Category 2 hurricane, but forecasters said it is expected to weaken as it moves north. Ida drenched Nicaragua after making landfall last week as a Category 1 hurricane, then weakened to a tropical storm before resuming strength.

In El Salvador, at least 91 people died in flooding and mudslides, according to the government, but a low-pressure system out of the Pacific -- not Hurricane Ida -- triggered the disaster, forecaster Robby Berg of the National Hurricane Center said Sunday.

From Grande Isle, Louisiana, to west of Pascagoula, Mississippi, a tropical storm warning and a hurricane watch are in effect. This area includes New Orleans, which the center earlier excluded from the watch, and Lake Pontchartrain, the hurricane center said.

Hurricane Ida "threatens the safety and security of those citizens" along the state's southeast coastline, he wrote in the declaration. The declaration gives the director of the governor's office of emergency preparedness authority "to undertake any activity authorized by law which he deems necessary and appropriate" to prepare for the possibility of a hurricane.

Alabama's Baldwin County commission urged that residents living in mobile homes, coastal communities or low-lying, flood-prone areas voluntarily evacuate. The county is under a local state of emergency and opened a shelter, according to a Sunday night statement from the county commission.

As of 10 p.m. ET Sunday, Ida had maximum sustained winds near 105 mph (165 km/hr) with higher gusts. But the storm was expected to weaken on Monday and possibly begin losing tropical characteristics on Tuesday, the hurricane center said.

The center of Ida was located about 400 miles (645 km) south-southeast of the mouth of the Mississippi River, forecasters said. It was moving north-northwest at nearly 14 mph (22 km/hr) and was expected to increase in speed. The storm was expected to be near coastal areas of the northern Gulf by Monday night or early Tuesday, the hurricane center said.

As Ida moves in the Gulf of Mexico, conditions are expected to be unfavorable for any additional development, said CNN meteorologist Dave Hennen. Ida is expected to weaken because of a combination of wind shear, cooler water temperatures and the storm's interaction with a strong frontal system pushing off the Gulf Coast, he said.

But Ida is forecast to remain a hurricane as it moves in the northern Gulf toward the U.S. coast, the center said.

Florida's Division of Emergency Management asked residents to have disaster plans in place.

"Whether Ida maintains a storm or loses tropical characteristics, the Florida Gulf Coast region has the potential to see several inches of rain, strong winds, isolated tornadoes and dangerous surf and coastal flooding beginning Monday evening and continuing into Wednesday," the office said in a statement.

The area stretching from Indian Pass, Florida, to Aucilla River, Florida, is also under a tropical storm warning. Tropical storm conditions are possible within 24 hours, the center said.

Ida could drop between 1 and 3 inches of rain on portions of western Cuba, with isolated amounts of 8 inches possible in some spots, forecasters said. The central and eastern areas of the Gulf Coast northward to eastern Tennessee Valley and southern Appalachian Mountains could see 3 to 5 inches of rain with some areas getting as much as 8 inches, the center said.