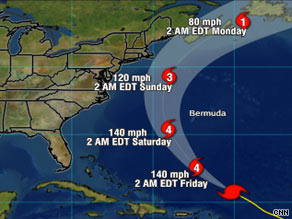 As of 11 p.m. ET Thursday, Bill's center was about 510 miles (825 kilometers) south of Bermuda, and about 975 miles (1,570 kilometers) southeast of Cape Hatteras, North Carolina, the hurricane center said. The storm was moving northwest at near 18 mph (30 kph), and is expected to continue that motion overnight, with a gradual turn to the north-northwest on Friday followed by a turn toward the north on Saturday.

"The core of the hurricane is expected to pass between Bermuda and the east coast of the United States on Saturday," forecasters said.

Bill's maximum sustained winds had increased slightly to 125 mph (205 kph), with higher gusts, the hurricane center said. It was downgraded to a Category 3 storm from Category 4 status early Thursday, after its top sustained winds slipped below 131 mph (211 kph).

Fluctuations in intensity are likely over the next 12 to 24 hours, however, and Bill could regain Category 4 strength Friday, forecasters said.

Large swells generated by Bill were affecting the northern Leeward Islands on Thursday, along with Puerto Rico and the island of Hispaniola, shared by Haiti and the Dominican Republic. The East Coast of the United States should start seeing large swells during the next few days, along with the Bahamas, Bermuda and the eastern coast of Canada, the hurricane center said. "These swells will cause extremely dangerous surf and life-threatening rip currents."

Bill is forecast to diminish into a Category 1 hurricane by Sunday evening, when it could make landfall near Nova Scotia or Newfoundland, Canada.

All About National Hurricane Center • Bermuda