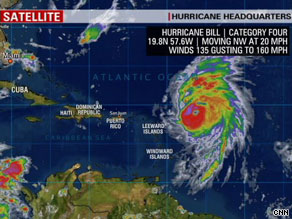 Most forecast maps show Hurricane Bill passing to the west of Bermuda.

Although Bill is not expected to make a direct hit on the island, forecasters cautioned that the storm is large and will generate large swells on Bermuda as well as the islands of the northeast Caribbean Sea over the next day or two.

Swells may also affect the eastern United States on Friday and Saturday, the National Hurricane Center said. CNN meteorologists said Bill could cause cause dangerous rip tides and some coastal flooding in the northeast United States and could move very close to or make landfall in Newfoundland, Canada, early next week.

In addition, Bill may strengthen further over the next couple of days, forecasters said.

As of 5 p.m. ET, Bill's center was about 335 miles northeast of the Leeward Islands and about 970 miles south-southeast of Bermuda, the hurricane center said.

"It's a little too early to evaluate what kind of direct impact Bill may have," said Jack Bevin, a senior hurricane specialist. "Most of the computer guidance has the storm passing between Bermuda and the U.S. coastline, then turning northeastward."

Other models show Bill turning more sharply out to sea and not affecting any areas, he said.

Bill's maximum sustained winds were at 135 mph Wednesday afternoon. It was moving northwest at near 20 mph and was expected to continue that motion over the next day or so, turning north-northwest by late Friday.

Five-day forecast maps show Bill passing to the west of Bermuda before turning to the northwest.

All About Hurricanes and Cyclones • National Hurricane Center • Bermuda