MIAMI, Florida (CNN) -- Hurricane Bill churned in the Atlantic Ocean toward the west-northwest as a major Category 3 hurricane Tuesday evening. 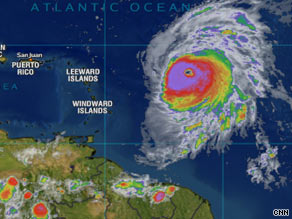 Hurricane Bill is expected to continue toward the northwest Tuesday night and Wednesday.

Around 8:30 p.m., reports from a National Oceanic and Atmospheric Administration plane indicated Bill had strengthened, with maximum sustained winds near 125 mph. The National Hurricane Center said further strengthening is possible.

The hurricane center expects Bill to turn to the northwest Wednesday.

Although Bermuda may escape a direct hit from Bill, it might experience strong waves and fierce winds, meteorologists said.

No computer models Tuesday showed Bill posing a danger to the United States.

Bill, the first hurricane of the 2009 Atlantic season, was heading west-northwest at near 16 mph as of Tuesday afternoon. It was centered about 635 miles east of the Leeward Islands.

The remnants of Tropical Depression Ana continued to drop heavy rain across Hispaniola and Cuba on Tuesday, CNN meteorologists said. Forecasters expect Ana to wash South Florida in heavy rain as it passes through the Keys this week.

There's a slight chance that Ana could regenerate into a tropical cyclone after it moves into the southeastern Gulf of Mexico this week, the weather service said.

All About National Hurricane Center • Weather