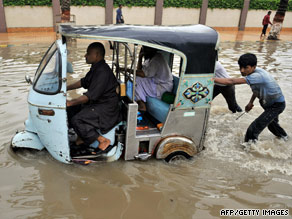 Pakistanis push a stranded auto-rickshaw along a flooded street in Karachi on Sunday.

Officials combed the city looking for bodies. The health department confirmed 32 deaths and said it received reports of more.

"Most of them are either from drowning or they were deaths when the walls or roofs of their houses collapses," said Dr. A.D. Sajnani of the health department.

"The entire city is disrupted," said Muhammad Aly Balagamwala, a Karachi businessman. "Most places lost power for 28 to 30 hours, and some are still without power. The rain flooded offices. We lost water. Everything is shut down."

Many residents took to the streets to protest the massive power outage in the southern city. They threw rocks at the offices of the power company and burned tires.

"I guess there comes a point you just snap and you can't take it anymore," Balagamwala said. "To the credit of the government, a lot of cleanup work has been done since last night."

The rain began Friday night, and by Sunday the city had received almost 9 inches (22.9 cm), the most since 1977, said Mayor Syed Mustafa Kamal.

Monsoon rains sweep across the subcontinent from June to September. While they bring much-needed relief to often-parched farmlands, they also leave a trail of landslides, home collapses and floods that sometimes claim dozens of lives.