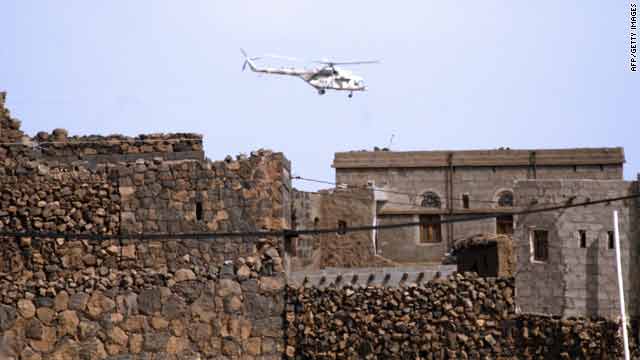 A Yemeni army helicopter carries out operations against al Qaeda suspects on December 17 in the Sanaa province.
STORY HIGHLIGHTS

Washington (CNN) -- The U.S. and Yemen are now looking at fresh targets in Yemen for a potential retaliation strike, two senior U.S. officials told CNN Tuesday, in the aftermath of the botched Christmas Day attack on an airliner that al Qaeda in Yemen claims it organized.

The officials asked not to be not be identified because of the sensitive nature of the information. They both stressed the effort is aimed at being ready with options for the White House if President Obama orders a retaliatory strike. The effort is to see whether targets can be specifically linked to the airliner incident and its planning.

U.S. special operations forces and intelligence agencies, and their Yemeni counterparts, are working to identify potential al Qaeda targets in Yemen, one of the officials said. This is part of a new classified agreement with the Yemeni government that the two countries will work together and that the U.S. will remain publicly silent on its role in providing intelligence and weapons to conduct strikes.

One of the officials said Yemen has not yet consented to the type of special forces helicopter-borne air assault that would put U.S. commandos on the ground with the mission of capturing suspects for further interrogation. That is also a capability the U.S. would like the Yemenis to eventually develop the official said.

At this point, the U.S. believes there may be a few hundred al Qaeda fighters in Yemen centered around a group of key network leaders. U.S. intelligence believes some key leaders were killed in recent airstrikes but is still working to confirm details.

U.S. military and intelligence officials describe to CNN an al Qaeda network with organized command and control that has evolved and grown over the past year. U.S. intelligence concludes there are several training camps similar to those established in other countries where one or two dozen fighters at a time train.

The U.S. and Yemenis are also looking into the possibility the Nigerian suspect in the airliner incident trained at one of the camps.

One of the camps was among the targets in each set of airstrikes earlier this month.