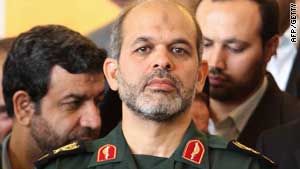 Tehran, Iran (CNN) -- Iran tested an upgraded version of a surface-to-surface missile with a range that makes it capable of reaching parts of Europe, state-run television reported Wednesday.

Vahidi said the missile has a shorter launch time and is intended to boost Iran's deterrent capability.

In Washington, Pentagon spokesman Geoff Morrell said Defense Secretary Robert Gates had seen the intelligence on the launch, which occurred Tuesday, "and, based on that, is clearly concerned."

But a U.S. intelligence official said the test launch does not represent "a major advancement" in Iran's missile technology. The official added that Iran carries out such tests on a "routine basis ... to attract attention."

Iran tested the initial version of the Sajil-2 in May.

In September, days before a key meeting over nuclear issues with industrialized powers, Iran tested two types of long-range missiles.

Those tests drew condemnation after the Islamic republic revealed the existence of a covert uranium enrichment site near the city of Qom.

Iran shocked the world with that revelation. Since then, it has allowed inspectors from the U.N. nuclear watchdog agency to visit the plant.

Western powers fear that Iran is intent on developing nuclear weapons. That's a claim Tehran denies, but the latest test-firing of the Sajil-2 could add to existing tensions.