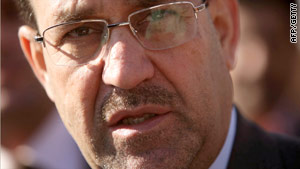 Baghdad, Iraq (CNN) -- Iraqi Prime Minister Nuri al-Maliki has hailed the passage of a law that calls for elections seen as critical to U.S. plans to withdraw troops.

The elections law could strengthen national unity and help "achieve the aspirations of our people" to establish a democratic system ensuring rights for Iraqis "to live in dignity, justice and equality," the prime minister said Monday in a congratulatory statement to Iraqis.

Iraqi lawmakers struck a deal Sunday night to revise the country's elections law after months of disputes that could force a delay of the country's upcoming parliamentary vote.

Iraq's Sunni Arab vice president, Tariq al-Hashimi, vetoed a previous measure, but al-Hashimi spokesman Abdul Ellah Kadim told CNN that the vice president is satisfied with the revisions that passed late Sunday. Kadim said al-Hashimi has congratulated the Iraqi people and the lawmakers on their "achievement."

It remained unclear when elections for a new parliament would be held, however, and the independent electoral commission has already ruled out a chance at meeting its current deadline of late January.

The parliament passed an "explanatory memorandum" to the new elections law shortly before midnight Sunday in an urgent session called by the speaker of the parliament. The amendment brought the legislation in line with al-Hashimi's demands, Kurdish lawmaker Abdulbari al-Zebari told CNN.

Iraq's three-member Presidency Council, which includes President Jalal Talabani and two vice presidents, must unanimously approve legislation passed by parliament. Al-Hashimi had vetoed the election bill in November, arguing that it failed to provide enough seats for Iraqi refugees, many of whom are Sunnis.

The United Nations last week suggested the elections be held February 27, 2010. U.N. and U.S. officials have been involved in election talks to push for a compromise among Iraqi politicians.

"This legislative action will allow Iraq to hold national elections within Iraq's constitutional framework," the White House said Sunday in a statement. "It is a decisive moment for Iraq's democracy and we congratulate the Iraqi people and their elected representatives."

For the U.S. military, the election is an important step in plans for a withdrawal from Iraq.

The U.S. military has said it would keep the current troop levels of 115,000 until 60 days after the elections and then start the pullout, aiming for an end-of-August deadline for withdrawing combat troops from Iraq.

A residual force of up to 50,000 troops would be left in the country until complete withdrawal at the end of 2011.

Last month, Gen. Ray Odierno, the top U.S. commander in Iraq, said he had "flexibility" in this matter and did not have to make any decisions on withdrawal until late spring.

Meanwhile a bomb blast at a school in a predominantly Shiite neighborhood killed seven people and wounded 41 others in the Iraqi capital Monday, officials said.

The explosion took place in the playground of a boys' school in Sadr City, the Interior Ministry said. The bomb was hidden in a plastic bag, an official said.

Most of the killed or wounded were students aged 12 to 14, Interior Ministry officials said.

In another incident, a civilian was killed and five others wounded when a bomb attached to a car exploded in the Mansour district in western Baghdad, authorities said.