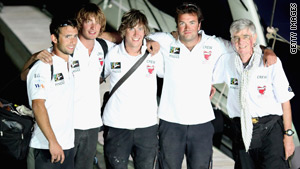 The five British sailors arrive at a Yacht club in Dubai Wednesday after being detained in Iran since November 25.
STORY HIGHLIGHTS

"We did say to everybody in there, and to people in Bahrain, and to people in Tehran who have been working on this how much we appreciated their efforts, how well they've handled the situation and how glad we are to see our boys home," Young said.

The parents appeared at a news conference held in front of the British Foreign and Commonwealth Office in London.

Young had said he was able to speak to his son briefly Monday on a cell phone belonging to one of the other men. The father said he was reassured that the men were being treated well.

A map of the Gulf
RELATED TOPICS

The Times of London said Young and Porter are 21 years old, Usher is 26, Smith is 31, and Bloomer is believed to be in his 60s. Bloomer is from Dublin, Ireland, the paper said, and apparently has dual citizenship.

Iran's navy detained the men November 25 as their racing yacht traveled from Bahrain to Dubai for a competition.

Iranian authorities said they released the men after determining that they had accidentally wandered into the country's waters, the semi-official Fars news agency said.

The sailors had told relatives that their boat became disabled and was hard to steer.

Young said his son told him the group was tense when the Iranians first picked them up, but then everything was "cool." Another sailor said they were temporarily blindfolded.

The men and their yacht were towed into international waters Wednesday, and representatives from the company that owns the boat, Sail Bahrain, met them to bring them ashore in Dubai.

Early Wednesday, after receiving the call that his son, Luke, and his crewmates were going to be freed, Charles Porter spoke informally to reporters near his home.

"It was all fairly nerve-racking last night," the father said. He said the Foreign Office awakened the family at 5:30 a.m. to tell them the news.

Watch the Porters describe getting the call

"We've spoken to Luke," Porter said. "He's very, very tired. He's been through a lot. He said that particularly the first couple of days were upsetting."

"He got the feeling after a couple of days that they realized they weren't dealing with anything sinister," the father added.

Luke Porter's twin sister, Jess, said she was "absolutely over the moon [and] relieved to hear his voice. We're such a close family."

British authorities on Tuesday had asked for a speedy resolution in the case, after an Iranian official said the sailors could be dealt with severely if it was determined they had ill intentions.

Young said it probably helped that the incident was kept low-key, without a lot of media fanfare.

Andrew Pindar, Sail Bahrain chairman, said Tuesday evening that the men had had problems with the boat's propeller and that that might have caused them to drift into Iranian waters. The father of one sailor said the propeller had fallen off.

Assuming that the five men might see Wednesday's news conference, one reporter asked the parents what they would say to their son.

"I would say don't get lost on your way to Dubai," Young said.