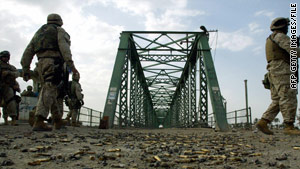 Washington (CNN) -- Three U.S. Navy SEALs face criminal charges after the alleged mastermind of one of the most notorious crimes against Americans in Iraq accused them of punching him after his capture, the military said Wednesday.

Ahmed Hashim Abed -- thought to be behind the slayings and mutilation of four U.S. contractors in Falluja in 2004 and captured in summer -- made the accusations against the three servicemen, said Lt. Col. Holly Silkman, a spokeswoman for U.S. Central Command.

A civilian lawyer for one of three SEALs said his client and the other SEALs declined a nonjudicial resolution to the case, a step sometimes called a "captain's mast." The servicemen say they did not harm the detainee in any way and they want their names cleared in a court-martial so they can continue their careers in the Navy, said the attorney, Neil Puckett.

Because the charges against Petty Officer 2nd Class Matthew McCabe, Petty Officer Jonathan Keefe and Petty Officer Julio Heurtas are the military equivalent of misdemeanors, they will go before a special court-martial, which is for less serious offenses than those heard in a general court-martial. If found guilty, they could be sentenced to a maximum of a year in a military prison, demotion to the lowest Navy rank, a cut in pay and a bad conduct discharge.

But if found innocent of all charges, they would be able to continue their careers with no record of the case in their personnel files.

The three SEALs are with their unit in Norfolk, Virginia. They will make an initial appearance before a military judge on December 7. The court-martial is scheduled to begin in January.

The attorney said he expects the SEALs will not waive their constitutional right to confront the accuser in court, which could cause a logistical challenge. Abed is believed to be in a U.S. military detention center overseas, and it is unclear if the military would want him brought to the United States for the court-martial.

The four contractors, one of whom was a former Navy SEAL, were working for the Blackwater company when they were attacked in Falluja in 2004. After they were killed with hand grenades and rifles, their bodies were set on fire and dragged through the streets. The bodies of two of them were hung from a bridge in Falluja, an image that was broadcast around the world.

Four days after the attack, the U.S. Marines launched a major offensive inside Falluja, in part to help find the killers.