WASHINGTON (CNN) -- More than 3,000 U.S. troops scheduled to deploy to Iraq won't go after all, as the military tries to draw down troop levels in the war-torn country, a Pentagon spokesman said Saturday. 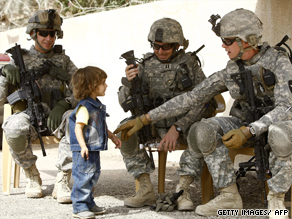 U.S. troops speak to an Iraqi child in Baghdad on Monday.

"[The cancellation] reflects a thorough assessment of the security environment in Iraq and continued improvement in the ability of the Iraqi security forces to safeguard Iraqi citizens and institutions," Butterbaugh said.

The National Guard unit is still on schedule to return home, which will speed up the drawdown of forces, he said.

The troop withdrawal in Iraq coincides with a debate in the Obama administration on whether to send as many as 40,000 more U.S. troops to Afghanistan. As of Friday, 250 U.S. soldiers have been killed in Afghanistan since the start of the year, according to a CNN tally based on Pentagon numbers.

The United States plans to withdraw all its combat troops from Iraq by August, leaving 50,000 in advisory roles. Those advisers are to leave by the end of 2011.

Concerns that a delay in the upcoming Iraqi elections could put a dent in scheduled withdrawals was rejected Friday by U.S. Ambassador to Iraq Chris Hill.

"As for our schedule of troop withdrawal, we've been pretty clear about when the troops would be withdrawn," he told CNN. "So our plan is to draw down the troops as we've said we're going [to] do."

The polls are scheduled to open January 16, but both the United States and the United Nations are worried because Iraq still has no election law. If a new law isn't adopted, the government may have to change the election date or rely on the law used in the 2005 elections, some officials say. A vote on the new law is expected Monday.

Pentagon officials also must weigh the impact of continuing violence in the country.

Hill said the violence is a concern, as are insurgent efforts to undermine attempts at reconciliation in the divided country.

"Reconciliation is a tough business. I mean I've been in some of these meetings with people, you know, they don't like each other, you have to get them to work together, get them to understand their futures are together, and then you get a bombing, which makes it even tougher," Hill said.

"Again, I think the Iraqi people have really signaled that they are really sick and tired of this stuff."

Four soldiers were killed and 10 people, including civilians and security forces, were wounded when a bomb targeting an Iraqi army checkpoint exploded in Falluja, an Anbar province town, an Iraqi Interior Ministry official said.

Elsewhere in Anbar, a suicide truck bomb hit a police checkpoint on a bridge west of Ramadi, wounding a police officer. The blast badly damaged the bridge, which carries a highway linking Iraq with Jordan and Syria, the official said. Traffic had to be rerouted to an another road.

Anbar province, a massive region populated mostly by Sunni Arabs, had been a major front in the Iraqi war.

The al Qaeda in Iraq militant group once held great sway in Anbar, but its influence lessened with the advent of U.S.-backed groups called Awakening Councils.

CNN's Scott Spoerry and Mohammed Jamjoom contributed to this report.

All About Iraq • Chris Hill • Anbar Province • The Pentagon