By Bill Richardson
Special to CNN 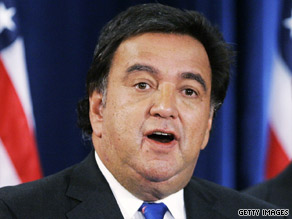 Bill Richardson says peace between Israel, Palestinians would go a long way to resolving issues in the region.

(CNN) -- President Obama, in his address to the United Nations General Assembly on Wednesday, announced the next phase in America's efforts to finally end the decades-long Israeli-Arab conflict and remove one of the greatest destabilizing elements to America's national security interests from the Middle East playing field.

Like health care reform, this is a daunting task, and in order for the president to be the last one confronting this, Congress and Americans of all stripes should be supporting him.

This is a welcome change from the past eight years. The United States has long sought to manage an untenable combination of circumstances in the Middle East. Rather than the situation getting better, it has only gotten worse, ultimately resulting in the debacle in Iraq, our difficult fight in Afghanistan, our continued hunt for al Qaeda, tensions with Iran and perpetual insecurity for Israel.

It is clear that failure to address the enduring Arab-Israeli conflict severely impedes our ability to advance new interests in the Middle East. Those challenges are especially noteworthy as we look to begin strategic negotiations with Iran.

I have argued that saber-rattling is not a good way to get the Iranians to cooperate on ensuring that their nuclear program is limited to legitimate civilian spheres. It will not help in getting Iran's help in stabilizing Iraq as U.S. troops withdraw, and it will not help in ensuring Iranian and Arab cooperation in Afghanistan as the United States develops an exit strategy.

Ending the Israeli-Arab conflict, on the other hand, will provide the United States with a much better environment to advance its diplomatic efforts vis-à-vis Iran.

Every single Arab country has repeatedly pledged to normalize relations with Israel once a Palestinian state is created and once peace agreements exist between Israel and Palestine, Syria and Lebanon. Saudi Arabia has taken the lead in ensuring that the Organization of Islamic Conference, which includes every Muslim-majority state in the world, has also endorsed this goal.

The comprehensive peace agreement that Obama, Secretary of State Hillary Clinton and special envoy George Mitchell are all working toward effectively takes away Iran's role as the champion of the Palestinians, a significant distraction to our real interests when dealing with Iran.

This does not mean that there can be any sacrifice of Israel's security interests in the process of ensuring America's national security. Indeed, leaders in Israel from the right and the left, from Ariel Sharon to Yitzhak Rabin, have all argued persuasively that Israel's long-term security depends on an end to the occupation. My own visits to Israel and throughout the United States have convinced me that the majority of Americans and Israelis agree.

The devil is in the details. Obama has now expressed America's intent to commence final status negotiations between the Palestinians and the Israelis as soon as possible.

In the official previous attempts at final status talks, at Camp David in July 2000, at Taba in January 2001 and after Annapolis in 2007, the Palestinians and Israelis agreed on much but disagreed on specific issues of existential importance to the both of them. Left to their own devices, we should expect the same result.

That is why the United States will have to make it absolutely clear to all sides that we have interests in this fight as well. The United States has been and will eternally remain Israel's friend, ally and protector, and the best way to ensure that alliance is to expand the scope of our friendship to include a Palestinian state and a new Middle East free from Israeli-Arab conflict.

As the president said Wednesday, we do Israel no favors "when we fail to couple an unwavering commitment to its security with an insistence that Israel respect the legitimate claims and rights of the Palestinians."

Time will not be on our side. Our rivals and enemies will do what they can to ensure that this process fails or that it is drawn out long enough to make success impossible. The greater, and quicker, our success on this front, the sooner we can leverage it in our diplomacy with Iran and in our fight with jihadists.

The greatest battles are those fought for peace and the smartest ones are those that can be fought without bloodshed. The American people have tasked Obama with ensuring our security at home and abroad. As he engages on ending this conflict, his convictions and leadership will be tested, and he will need our energy and support.

The opinions expressed in this commentary are solely those of Bill Richardson.