BAGHDAD, Iraq (CNN) -- The U.S. military closed its detention facility in southern Iraq on Thursday after a plane carried the last remaining prisoners to another facility in Baghdad. 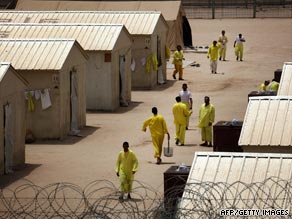 Iraqi detainees walk around Camp Bucca detention centre on May 20, 2008

The United States has been releasing detainees or transferring custody to the Iraqi government, a goal spelled out in the bilateral security agreement negotiated last year between the two nations.

Since February, the Americans have released about 750 detainees from its detention facilities and transferred 200 more to Iraqi authorities each month, the military said.

Camp Bucca, in the southern port city of Basra, was one of three prisons operated by U.S.-led forces in Iraq. The other two are Camp Cropper, adjacent to the Baghdad airport, and Camp Taji, just north of the capital.

Both camps are scheduled to be handed over to the Iraqis next year.

The last 180 detainees from Bucca were airlifted by military transport early Thursday morning to one of those two other facilities. A total of 8,305 detainees still remain in U.S. custody, about half the number at the start of the year.