JERUSALEM (CNN) -- Israeli Prime Minister Benjamin Netanyahu said Monday that a complete halt of Jewish settlements will not happen, according to a parliament source. 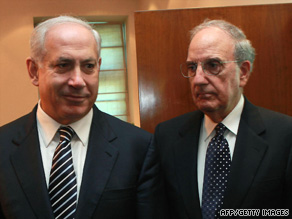 Netanyahu said at a closed-door Knesset committee meeting that Israel would agree only to a partial reduction of housing construction and for a limited time, not the year the United States would like, said a government official who was not authorized to speak about the meeting and did not want to be identified.

Netanyahu said no agreement had been reached on the length of time for the building hiatus, the source told CNN. Netanyahu has said in the past that a moratorium would not apply to East Jerusalem, which Israel claims as part of its sovereign capital since taking the territory away from Jordan during the Six Day War in 1967. Palestinians want East Jerusalem to be the capital of a future Palestinian state.

Netanyahu met for more than two hours Tuesday with George Mitchell, the former U.S. senator who is the Obama administration's envoy to the Middle East. Netanyahu spokesman Mark Regev would not comment on the substance of the talks, other than to say that the discussions were ongoing; but Mitchell was expected to press Netanyahu to soften his stance on the settlements.

Mitchell is in the region to lay out terms for resuming direct peace talks between the Israelis and Palestinians, stalled since February, when Netanyahu took office. Mitchell was to meet with Palestinian Authority President Mahmoud Abbas later Tuesday in Ramallah.

The United States and Israel have publicly disagreed on Israeli plans to build more housing on land the Palestinians regard as theirs.

Israel recently approved the construction of 455 new units -- in addition to the 2,500 already in various stages of construction -- in the West Bank, over the explicit objections of Washington.

Israel argues that the Jewish settlements, spread throughout the West Bank, are needed to accommodate growth from residents of existing settlements. But the Palestinians are demanding a complete freeze on Israeli construction as a precondition to peace talks.