FALLUJA, Iraq (CNN) -- Like many young boys, Khidir loves playing with toy cars and wants to be a policeman like his father when he grows up. But it was his father's very job that caused the tiny child to suffer the unimaginable. 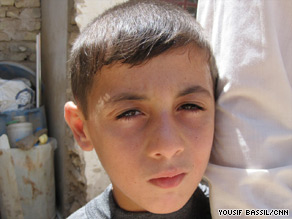 Khidir, now 8, was kidnapped and held hostage for two years by operatives with al Qaeda in Iraq.

Khidir was just 6 years old when he was savagely ripped away from his family, kidnapped by al Qaeda operatives in Iraq.

"They beat me with a shovel, they pulled my teeth out with pliers, they would go like this and pull it," said Khidir, now 8, demonstrating with his hands. "And they would make me work on the farm gathering carrots."

What followed was even more horrific, an ordeal that would last for two years in captivity. Khidir and his father spoke to CNN recently, more than half a year after his rescue by Iraqi police.

"This is where they hammered a nail into my leg and then they pulled it out," he says, lifting up his pant leg to show a tiny wound.

He says his captors also pulled out each of his tiny fingernails, broke both his arms, and beat him repeatedly on the side of the head with a shovel. He still suffers chronic headaches. He remembers them laughing as they inflicted the pain.

"I would think about my mommy and daddy," he replies, when asked how he managed to get through the agony.

His father, Abdul Qader, struggles for words. "When he tells me about how they would torture him, I can't tolerate it. I start crying," he says. "What hurts me the most is when they hammered a nail into his leg."

The father, a police officer, was sleeping at the police station in Falluja when his son was kidnapped. It was too dangerous to go home regularly. Although Falluja was no longer controlled by insurgents, assassinations against police were common.

"I woke up to the sound of a huge explosion ... and then I heard my name on the radio. I ran outside and they came to me saying your house was blown up," he says.

"When the police patrol came back, they all started kissing and comforting me," he continues. "I was asking, 'What's going on? Where is my family?' They told me that they took my son. This was a disaster. I went mad that day, I wasn't normal, I was hysterical."

Khidir's grandmother was at home with the family at the time.

"The kidnappers climbed the fence and kicked in the door," she says."They were screaming for Abdul Qader. I told them he's not here. They called me a liar and said we want his son. His son was hiding behind me, clutching my clothes. I said this is not his son. They hit me on the back with a rifle and ripped him out of my arms."

The last thing she remembers were his screams of "Granny, Granny!"

The attackers rigged the house with explosives and demolished it before taking off with the 6-year-old. The boy's grandmother and seven other family members rushed out of the home before it exploded.

"The kidnappers called me on the phone and demanded that some prisoners that we had be released or they would slit his throat," Khidir's father says. "But I said no to the release. I would not put killers back out on the street that would hurt other Muslims. So I thought to myself, 'Let my son be a martyr.' "

He even held a secret funeral for his little boy. He didn't want to tell the rest of the family that he had refused the kidnappers' ultimatum, allowing them to hope that he was still alive.

"We thought that it was just a tip to ambush us, but we considered the mission as a sacrifice," said Iraqi police Capt. Khalib Ali. "Either we find the children and free them or face the danger and take the risk."

The tip led the Iraqi police to a rundown farm and a series of mud huts. Khidir's tiny body was twisted abnormally. And in another hut, they found another child. Two children are still believed to be with the kidnappers.

Al Qaeda in Iraq has historically kidnapped children for money, to pressure officials, and even to use in terrorist attacks.

For Khidir's father, it was as if his son had come back from the dead.

"He didn't recognize his mother or his grandmother," Abdul Qader says. "But then he saw me in uniform and ran to me. I went flying toward him to hug him. People said be careful; both his arms are broken. So I held him from his waist, and he hugged me, kissed me, smelled me, and then broke into a smile."

The father flips through old family photos -- all they were able to salvage from their destroyed home -- and notes some of the kidnappers are still at large. He still fears for his son's safety, but says he won't quit the police force.

"Never, never," he says. "If I leave the police force, if others leave the force, who will protect us from the terrorists? We are the only ones."

All About Iraq • Terrorism • Al Qaeda in Iraq • War and Conflict