(CNN) -- Al Qaeda's second-in-command has accused President Obama of supporting a Palestinian state that would do the bidding of Israel. 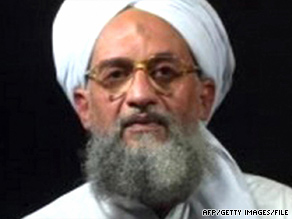 Ayman al-Zawahiri says on a recent tape, "Israel is a crime that needs to be wiped out."

"Obama wants a Palestinian state that works as a branch for the Israeli government," Ayman al-Zawahiri said in a nearly 90-minute video called, "The Realities of Jihad and the Fallacies of Hypocrisy."

The latest in a series of such videos was posted Monday on radical Islamist Web sites by al Qaeda's production company, As-Sahab Media.

"Israel is a crime that needs to be wiped out," said al-Zawahiri, who likened Obama's policies to those of President Bush.

"The promises of the two states and ending the settlements were made by Bush, so what's new? This is the continuation of the same Zionist crusader crime against Muslims since the end of World War II," he said.

"Obama can come with all the eloquent words he has, but it is nothing but illusions."

Al-Zawahiri referred to a conditional truce offer he said had been made by al Qaeda leader Osama bin Laden.

"The mujahedeen opened the doors to start a new relationship, but [the Americans] insist that their relationships with the Muslim world must be based on hurting us and oppressing us," he said.

He had nothing but scorn for Obama's work. "What new did Obama bring us," he asked. "He brought us the bombing of Gaza where 1,000 martyrs died. He brought us the destruction in Afghanistan, Iraq and Pakistan. What else? He expanded the American prisons so they can absorb more innocent Muslims."

Al-Zawahiri referred to U.S. anti-terrorism efforts since the September 11 attacks on Washington and New York as a series of failures.

"After seven and a half years, their campaign failed in Iraq and in Afghanistan just like it failed in Somalia and will fail in Pakistan," he said. "The only reason the American administration changed its policy from Bush's motto that you are either with them or against them to Obama's saying that he wants to deal with the Islamic world based on a new policy [is] because of the heavy losses that they suffered from by the hands of the mujahedeen."

Al-Zawahiri vowed that the mujahedeen will not be deterred. "They will face that campaign no matter how long it will last, even till Judgment Day. No surrender, no defeat, no submission, no retreat when it comes to the right of the Muslims and their pride."

He praised insurgents in Afghanistan and Taliban leader Mullah Omar for daring to challenge the world's biggest superpower, saying, "This is an achievement by itself because it stood for its pride, dignity and lands."

Iran, too, was an object of criticism for the al Qaeda leader, who said Iranian leaders "never supported the Palestinians in Gaza, they didn't launch any rocket to aid them as they promised to do if Israel attacks Lebanon -- or is it that the Palestinians are second-class citizens?"

He added, "Iran is ready to sell out the Muslims anytime and aid the crusaders in their campaign against them."