Editor's note: Reza Sayah is one of the few Western journalists reporting from Tehran after the Iranian government placed restrictions on coverage. 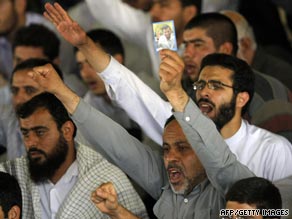 A man in the crowd holds up a photo of Ahmadinejad during Khamenei's address at Friday prayers.

TEHRAN, Iran (CNN) -- People in the crowd sang songs of tribute as they waited.

When he arrived, they stood and welcomed him in unison: "Praise be to God and to his prophet, Mohammed."

Ayatollah Ali Khamenei, Iran's supreme leader for two decades, took the stage during Friday prayers at Tehran University with a few notes on small pieces of paper in his left hand. He leaned on the lectern with his right arm, crippled in an 1981 assassination attempt.

He was ready to put an end to a week of unrest.

First, a sermon about the dangers of division and disunity, using the language of Islam. Then came secular sentences, decidedly direct.

He praised the huge turnout at the polls as a victory for Iran but criticized post-election turmoil as the work of Iran's enemies -- the United States, Israel and Britain.

"The enemies want to destroy our confidence. They want to create doubt about the election," Khamenei said.

A full hour passed before he delivered a verdict that supporters of opposition presidential candidate Mir Hossein Moussavi did not want to hear.

"Eleven million votes difference?" he asked. "Sometimes there's a margin of one hundred thousand or two hundred thousand, or one million, maximum. Then one can doubt, be concerned that there has been some rigging or manipulation.

"But there's a difference of 11 million votes. How can vote rigging happen?"

To be clear, he reminded the crowd of the victor at the polls. It was the man sitting in the front row: Iranian President Mahmoud Ahmadinejad.

He was the "the absolute victor," Khamenei said.

"If political elites want to ignore or break the law and willy-nilly take wrong measures which are harmful, they will be held accountable for all violence and blood and rioting."

Few in the crowd were disappointed with the cleric's words. "Death to America!" the people chanted repeatedly, interrupting Khamenei's speech. "Death to Israel."

Noticeably absent Friday was Moussavi, the man who had sparked Iran's unrest by calling for a recount of the votes. Absent, too, were Moussavi's supporters, who did not take to the streets to protest as they had done in previous days. There were no signs and placards on the streets. Or people clamoring for change.

The tens of thousands who showed up for Friday prayer were a stark contrast to the demonstrators. They were mostly religious conservatives, supporters of Ahmadinejad.

And they had a message for the president's opponent, though it was not always consistent. Some were conciliatory. "The nation should come together," one said. "We are all one."

Others took a hard line: "They must stop with the demonstrations, otherwise there will be consequences."

Just what those consequences might be may become apparent Saturday afternoon, when the demonstrators are expected again on the streets of Tehran.

But for now, Iran's supreme leader had issued his warning clearly: Enough is enough.