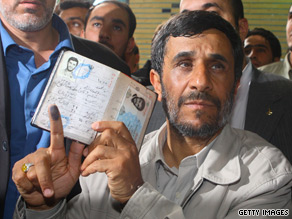 June 13
Moussavi calls for vote counting to stop, saying there are "blatant violations."

Following the announcement, angry crowds in Iran's capital break into shops, tear down signs and start fires as they protest the re-election of Ahmadinejad.

Supreme Leader Ayatollah Ali Khamenei gives his blessing to the outcome of the election.

Protests continue by Moussavi supporters, triggering a counterreaction from supporters of Ahmadinejad, tens of thousands of whom rallied in central Tehran.

June 15
Khamenei agrees to an investigation into the disputed presidential election and asks opposition leader Moussavi to pursue his allegation of ballot fraud through legal means.

Moussavi supporters take to the streets in the largest protest since the 1979 revolution. Moussavi makes his first public appearance since the vote. At least 8 people are reported dead -- one at the end of the protest, the others after allegedly attacking a military post.

Media rights group Reporters Without Borders urges nations not to recognize the results of the election, citing censorship and a crackdown on journalists.

Ahmadinejad leaves for Russia to meet with President Dmitry Medvedev. He is welcomed as the "newly re-elected president of Iran." Ahmadinejad returns to Iran later the same day.

Moussavi rejects the recount, saying it will be misused add more credence to a fraudulent ballot. He calls for fresh elections.

With rival rallies planned by backers of both Moussavi and Ahmadinejad in the center of Tehran, Moussavi urges his supporters to stay away, fearing further violence.

Iran's Ministry of Culture issues a ban on foreign media reporting from the streets of Tehran, meaning international news crews including CNN were not allowed to leave their hotels and offices.

Thousands of people take to the streets in support of both sides in the disputed election.

Moussavi's supporters take to streets of Tehran in a fifth day of demonstrations, staging what is billed as a "silent protest," with some marchers wearing tape over their mouths. Rally passes without violence.

Rights group Amnesty International says other protests are staged in other cities across Iran.

Iran's national football team wears green arm and wrist bands during a World Cup qualifying match in South Korea, a symbol taken by many to indicate solidarity with Moussavi's supporters.

June 18
Thousands of supporters of Mir Hossein Moussavi protest for a sixth consecutive day, many trading their green clothes for black garments in honor of at least eight protesters killed Monday.

Meanwhile, in a televised speech, President Mahmoud Ahmadinejad claims remarks he made on Sunday were taken out of context. After claiming victory in the elections, Ahmadinejad compared the putative losers to fans of a losing soccer team. "I was addressing those who started riots and set up fires and attacked people," he told the state-run news agency IRINN.

Press TV reports that Iran's Intelligence Ministry said it had arrested a number of "main agents" behind vandalism during the daily demonstrations.

June 19
In his first public appearance since the elections, supreme leader Ayatollah Ali Khamenei endorses Ahmadinejad's win, insisting the margin of victory -- some 11 million votes -- was too large to have been manipulated.

Khamenei expresses his support for Ahmadinejad and calls for an end to the protests, which he accused foreign powers including Britain, Israel and the United States of helping foment.

He urged critics of the electoral process to seek redress through legal channels and warned that perpetrators of violent unrest would be punished.