(CNN) -- Iranian protesters have found a new outlet to mobilize and take action. The presidential election has proved how much opposition supporters can demand change without necessarily taking to the streets. Just give them a computer and an Internet connection and watch what they can do. 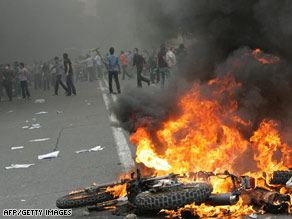 At the height of the protests and disorder in Tehran on Saturday and Sunday, Twitter was used to give graphic accounts to a worldwide audience - even if they were a maximum of 140 characters.

Tweets from "Change for Iran" were among several that offered real time updates: "...my friend saying more than 100 students arrested, I can't confirm this but the numbers are high. bastards just attacked us for no reason, I lost count of how much tear gas they launched at us! ...we have now some students with urgent need of medical attention I'm calling out to all ppl who can come here don't leave us."

Some Iranians are already veterans on social networking sites with loyal followings. They offer the world a unique voice: free, unfiltered and very different from what the Islamic Republic of Iran's media propaganda offers viewers and readers.

Internet service is available in Iran but it is still in its infancy. Available in homes, on hand-held devices and in select cafes, the Internet is slow and unreliable at times, says blogger and aspiring journalist Ali from Tehran, a supporter of opposition leader Mir Hossein Mossavi. This makes services such as Skype almost impossible to operate.

Watch the role technology has had in the election »

Still, it provides users with an outlet to the outside world as the country waits for broadband and wider wireless coverage. With the absence of text messaging and mobile services -- both were cut off across the country on and around election day and were still blocked on Sunday -- Twitter proved to be the most reliable communication technique between people inside Iran and millions of others on the outside thirsty for any update.

Twitter has enabled people to express to the world their hopes for the elections, excitement at the chance of exercising their right to vote, jubilation in President Mahmoud Ahmadinejad's camp and shock and disappointment among Mossavi's supporters.

Now they're keeping the Twitterverse ablaze with information about Moussavi, his challenge to the election results and his intent to request their annulment. Moussavi's supporters comfortably outnumber Ahmadinejad's on Twitter but both are represented.

Facebook is also very popular in Iran, says Ali. He wholeheartedly believes that Facebook was the reason behind what he describes as a successful campaign by President Ahmadinejad's main rival.

Ali says Moussavi campaign managers organized supporters, planned gatherings and garnered support through Facebook pages dedicated to the Reformist candidate. "His Facebook page got huge amount of fans on it, pictures spread extremely fast," says Ali. It was used on Saturday and Sunday to organize and announce street protests, to send out warnings about police activity, but especially to keep followers abreast of his whereabouts. They were the first to talk about his forced house arrest.

President Ahmadinejad also jumped on the social networking bandwagon ahead of the race. However, his popularity there pales in comparison to that of Moussavi. Both candidates' pages remain a main source of information for updates and breaking news. In fact we've seen many cases of news breaking on Facebook first while confirmation came later, including Moussavi's house arrest and Ahmadinejad's planned addresses.

According to Iranian bloggers, website filtering falls under the oversight of the Intelligence Ministry in conjunction with the Ministry of Information and Iran's judiciary. Bloggers complain that at times the ministry filters words like "violence," "unrest" and "democracy."

Recently, Ali believes the censors were filtering content based on a candidate's name. Moussavi supporters claim filtering particularly targeted their candidate after his popularity soared and authorities feared he would pose a serious challenge to Ahmadinejad.

Another challenge for Iranians comes from the U.S. Because of its sanctions against Iran, some services like video conversations are not allowed. So, it's a tap dance sometimes to figure out the best way to talk to someone in Iran.

People don't like to use landlines or mobile phones for fear of their calls being traced. They don't like e-mails as they can leave a trace. They do however feel comfortable with services like Google Talk. They find it safe, as no one can see what they look like and with common Iranian first names like "Ali" and "Shahrzad", as my main contacts are named, they find a way to communicate with the world as few Iranians have done before.