(CNN) -- In a new anti-Israel, anti-U.S. video, an American al Qaeda member makes reference to his Jewish ancestry for the first time in an official al Qaeda message. 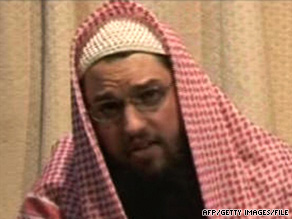 In the video, Adam Yahiye Gadahn, also known as Azzam the American, discusses his roots as he castigates U.S. policies and deplores Israel's offensive in Gaza that started in late December 2008 and continued into January.

"Let me here tell you something about myself and my biography, in which there is a benefit and a lesson," Gadahn says, as he elicits support from his fellow Muslims for "our weapons, funds and Jihad against the Jews and their allies everywhere."

"Your speaker has Jews in his ancestry, the last of whom was his grandfather," he says.

Growing up in rural California, Gadahn embraced Islam in the mid-1990s, moved to Pakistan and has appeared in al Qaeda videos before.

He was indicted in the United States in 2006 on charges of treason and material support to al Qaeda, according to the FBI. Gadahn is on the FBI's Most Wanted List, with a reward of up to $1 million leading to his capture. FBI records show Gadahn's date of birth as September 1, 1978.

The video -- in which Gadahn speaks Arabic, with English subtitles -- surfaced on Saturday. This account is based on an English transcript provided by As-Sahab Media, the media production company used by al Qaeda.

Gadahn's Jewish ancestry has been reported in the news media. But terrorism analyst Laura Mansfield says it is the first time Gadahn acknowledged his Jewish ancestry in an official al Qaeda message.

Gadahn says his grandfather was a "Zionist" and "a zealous supporter of the usurper entity, and a prominent member of a number of Zionist hate organizations."

"He used to repeat to me what he claimed are the virtues of this entity and encouraged me to visit it, specifically the city of Tel Aviv, where relatives of ours live," says Gadahn, referring to Israel.

He says his grandfather gave him a book by Israeli Prime Minister Benjamin Netanyahu called "A Place Among the Nations" -- in which the "rabid Zionist" sets out "feeble arguments and unmasked lies to justify the Jews' rape of Muslim Palestine."

But Gadahn says that despite his youth at the time, he didn't heed his grandfather's words.

"How can a person with an ounce of self-respect possibly stand in the ranks of criminals and killers who have no morals, no mercy, no humanity and indeed, no honor?" he says in reference to Zionists and Israel.

"Isn't it shameful enough for a person to carry the citizenship of America, the symbol of oppression and tyranny and advocate of terror in the world?"

Mansfield thinks the video may have been made between late April and mid-May, before President Obama's speech in Cairo, Egypt, addressing U.S. relations with Muslims.

Specifically mentioning the Gaza offensive and citing other hot spots such as Iraq, Afghanistan, Chechnya and Somalia, where the "Zio-Crusader alliance" is fighting his "brothers," he says "this open-faced aggression" comes as Obama has risen to power.

He scorns Obama's statements in his inaugural address and in Turkey that America isn't and won't be at war with Islam, and "other deceptive, false and sugarcoated words of endearment and respect." He says Obama's language is similar to words Netanyahu uttered in the Knesset in 1996.

Gadahn also backs the idea of targeting "Zio-Crusader" interests anywhere in the world, not just "within Palestine."