JERUSALEM (CNN) -- Pope Benedict XVI completed his eight-day tour of the Holy Land on Friday with an exhortation to both Israelis and Palestinians to work through their decades-old conflict. 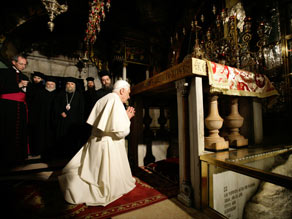 Pope Benedict XVI prays in Jerusalem on Friday at what's believed to be the burial site of Jesus.

"No more bloodshed! No more fighting! No more terrorism! No more war! Instead let us break the vicious circle of violence. Let there be lasting peace based on justice, let there be genuine reconciliation and healing," the pontiff said.

Benedict made the comments at a farewell ceremony at Ben Gurion International Airport in Tel Aviv before Israeli President Shimon Peres and other religious and secular leaders.

In his concluding remarks, Benedict called his visit to Israel's Holocaust memorial Yad Vashem and his conversations with survivors a "deeply moving encounter." He seemed to address some criticism he received within the country for not speaking in stronger terms about anti-Semitism and Holocaust denial.

Referring to the Holocaust, Benedict spoke of the victims who "were brutally exterminated under a godless regime that propagated an ideology of anti-Semitism and hatred."

After Benedict's Monday speech at Yad Vashem, the memorial's chairman, Holocaust survivor Rabbi Yisrael Lau, criticized the pope, saying the pontiff did not "participate in the pain of the Jewish people" and "used the term 'killed' when talking about Holocaust victims and not the word 'murdered' as his predecessor did."

Benedict drew the ire of Jews and German Catholics earlier this year by rehabilitating an excommunicated bishop who had disputed the number of Jews killed in concentration camps during World War II. The bishop's excommunication was unrelated to his Holocaust denial.

Friday, Benedict repeated his call for Palestinians to enjoy a "sovereign independent homeland" and "to live in dignity and to travel freely."

He remarked that "one of the saddest sights for me during my visit to these lands was the wall" -- a reference to the 20-foot concrete barrier he saw in Bethlehem during his visit to a Palestinian refugee camp. Israel says the structure, which it calls a security fence, was built to prevent terrorist attacks; Palestinians consider it an illegal land grab.

Benedict began the day with a busy morning in Jerusalem's Old City, including meeting the patriarchs of the Greek Orthodox and Armenian Apostolic churches.

Between sessions with the patriarchs, Benedict toured and prayed at the Church of the Holy Sepulcher, believed to be located on the site where Jesus was crucified and buried.

On his Middle East visit, the pope has navigated the region's treacherous political landscape, which often pits Jew against Muslim and Muslim against Christian.

Benedict has repeatedly called for reconciliation between the peoples of the region during his visit, urging Israelis and Palestinian to put aside their grievances and divisions.

"Just and peaceful coexistence among the peoples of the Middle East can only be achieved through a spirit of cooperation and mutual respect, in which the rights and dignity of all are acknowledged and upheld," the pope said. Celebrating Mass on Thursday, Benedict covered similar territory in his message to over 30,000 parishioners gathered at the Mount of the Transfiguration, outside Nazareth.

Watch the reaction of one visitor who attended Mass »

"Christians readily join Jews, Muslims, Druze and people of other religions in wishing to safeguard children from fanaticism and violence, while preparing them to be builders of a better world," he said.

Benedict's trip marks the first papal visit to some of Christianity's most holy places since Pope John Paul II made the pilgrimage in 2000.