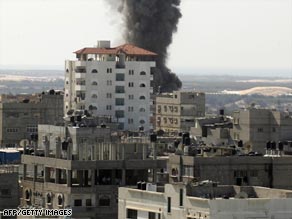 Smoke rises over the Gaza border town of Rafah after an Israeli air attack Wednesday.

There were no reported casualties in any of the attacks.

With the two rocket attacks on Wednesday, the Israeli military said more than 100 rockets, mortar shells and missiles have been fired at Israel by Palestinian militants in Gaza since Hamas leaders agreed to a cease-fire on January 18.

Israel also agreed to a cease-fire and pulled its troops out of Gaza in late January, ending a three-week military campaign that the Israel said was aimed at halting the rocket fire.

Israel routinely targets the tunnels under the Gaza-Egypt border which it says are being used by Gaza's Hamas leadership to smuggle weapons into the Palestinian territory.

But Palestinians say the tunnels are necessary to get basic food supplies that are not available in Gaza because of Israel's closure of its border crossings and seaports.

It is the latest tit-for-tat violence between Gaza militants and the Israeli military despite the cease-fires.

Egypt has been trying to broker a broader cease-fire agreement between Hamas and Israel.

Israel is demanding that Hamas release a kidnapped Israeli soldier before it fully reopens the border crossings with Gaza.

Hamas has rejected including the release of the soldier, Gilad Shalit, as part of a cease-fire negotiation with Israel.

All About Israel • Hamas • War and Conflict