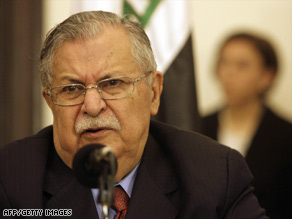 Iraqi President Jalal Talabani could be jeopardized by the resignations of five key members of his party.

Khosrat Rasul, the vice president of the Kurdistan Regional Government, resigned, along with four other members of the Patriotic Union of Kurdistan (PUK), according to Kurdish lawmakers.

Kurdish members of the Iraqi Parliament say the resignations threaten the delicate balance of power in Iraqi Kurdistan, a semi-autonomous region in northern Iraq. It has been the most stable part of the country since the 2003 U.S.-led invasion.

"It looks very serious," said Ala Talabani, the president's niece and a PUK member, as well as a member of Parliament. She spoke by phone from the Iraqi Kurdish city of Sulaimaniya, long a stronghold of the PUK.

"It's about corruption," Ala Talabani said of the resignations. "They are asking about the resources and the money. Who is spending it. And who is in charge of the income of the party."

"It's not good," said Mahmoud Othman, a member of the Iraqi Parliament and an independent Kurdish politician. "The PUK is one of the main two [Kurdish] players," he added. "A problem like this will upset the whole situation."

Iraqi Kurdistan broke free from Baghdad's control after the 1991 Gulf War. Since then, the region has been divided between two rival Kurdish factions, Talabani's PUK and the Kurdistan Democratic Party, led by Massoud Barzani.

For several years throughout the 1990s, the groups battled each other in the mountains and valleys of northern Iraq.

Those historic divisions faded somewhat following the United States' overthrow of Hussein. For the past five years, the Kurds have worked together in Baghdad to enhance the Kurdish region's position in Iraq.

Demands to expand the Kurdish zone of control and win the right to exploit oil deposits in Kurdish territory have increased tensions between Kurdish and Arab politicians.

The resignation of Rasul and his allies threatens the power base of Talabani, the first Kurdish president in Iraqi history.

"If it is not fixed by Talabani by tomorrow, this could change the entire landscape of Kurdish politics," said Hiwa Osman, the Iraq country director of the Institute for War and Peace Reporting.

Iraq's three northern Kurdish provinces are scheduled to hold regional elections in May. Talabani is expected to travel to Kurdistan to hold emergency meetings with Rasul and his other former comrades-in-arms.

This is not the first time the stout Kurdish leader has faced a rebellion from within the ranks of his followers. Kurdish observers say these disputes usually stem from disagreements over money and power.