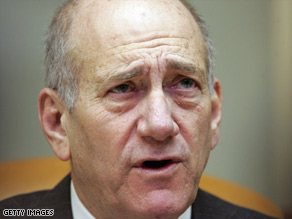 The Israeli military said airstrikes were underway late Sunday but would not confirm specific targets.

Israel launched its attack on Hamas in Gaza on December 27 with the stated aim of ending rocket attacks on southern Israel.

Hostilities left 1,300 Palestinians dead and 5,400 wounded. Thirteen Israelis, including 10 soldiers, were also killed in the fighting.

On January 21, Israel and Gaza's Hamas leadership each declared cease-fires that took effect after Israeli forces withdrew from the Palestinian territory.

Since the cease-fires began, militants have sporadically fired rockets into Israel. Israel has responded with air strikes.