RIYADH, Saudi Arabia (CNN -- Relations between Arab nations and the United States hinge on American leaders living up to their rhetoric about commitment to lasting peace in the Mideast, Saudi Prince Turki al-Faisal told CNN Saturday. 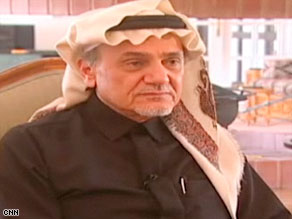 "President Obama, in his statement yesterday, said that he's genuinely making the effort to accomplish a peaceful resolution," al-Faisal, who served as Saudi ambassador to the United States from 2005 to 2007, told CNN's Nic Robertson in an interview Friday.

He said he was encouraged by Obama's appointment of George Mitchell as Mideast envoy, saying, "Mitchell comes with a track record of success." But he suggested Mitchell spend some time in the region to make real progress.

"American envoys, when they've dealt with the Middle East, have always come and gone," he said.

"I think it would be wise for Sen. Mitchell ... to pitch his tent in Ramallah or in Jerusalem, let's say, and spend a year, two, perhaps three years on the ground dealing with the daily aspects of making peace there."

Watch as al-Faisal talks about how the U.S. and the Mideast could build trust »

The United States' backing of Israel, in light of the latest Israeli military operations in Gaza, does not improve its standing in the Arab world, he said.

"What happened in Gaza, people have called it a tragedy," al-Faisal said. "I'd go further and say it was a catastrophe in all aspects of that word. The killing and the destruction was so barbaric by Israel, and unprecedented in a such a small area like Gaza.

They [Israelis] claim that they were very careful about collateral damage and they targeted only Hamas, as they call them, militants and operatives. Well, look at the figures.

"More than 400 children killed out of 1,300 [total deaths]. That doesn't show any precision of targeting. Israel claims that these are mishaps of war. If they are mishaps of war, well, why should you have a war?

"I think this is one of the issues that makes the relationship between the Arab world in general and Saudi Arabia in particular threatened when it comes to dealing with the United States," al-Faisal said. "... And President Bush, I think callously and unforgivably, gave Israel a green light to do everything that they wanted to do in Gaza without restraint."

U.S. and Israeli officials should recognize that operations like the recent one only serve to strengthen Hamas, as "Israel is a radioactive element in the area. Anyone it touches becomes heroic and legitimate ... because he or she is a victim."

Al-Faisal said he believes the United States and Israel should negotiate with Hamas. Reminded that the two nations consider Hamas a terrorist organization, he said, "I think this is another of the things that has to be reviewed by President Obama."

He believes that negotiations with Hamas should not undermine the Palestinian Authority, saying the authority's President Mahmoud Abbas "in my view, is the most tailor-made Palestinian leader for making peace and bringing stability and security to the Palestinian people."

Israel's operation in Gaza came after what it said was a barrage of rockets fired by Hamas militants into southern Israel.

Asked how to stop the rockets, al-Faisal said he thinks the key is to bring Hamas into the political fold. "Put it the other way," he said. "How can we convince Israel itself not to provoke Hamas into firing rockets?"

Israel claims that Hamas fired first, and al-Faisal said these claims underscore the importance of having someone on the ground like Mitchell. "To see who is telling the truth in a case like that is needed, and a necessity today, more than at any other time," he said.

The United States has called for nations like Saudi Arabia to accept Israel and normalize relations with the nation, he said, but Israel must make the first move.

Arab nations stand ready to make peace with Israel, he said, but Israel has not demonstrated an equal willingness. "That's the pity of it."

Israeli government spokesman Mark Regev told CNN the nation does not publicly discuss contacts with Arab nations with which it has no official diplomatic relations. Israel welcomed the Saudi peace initiative, he said, and is willing to negotiate with all Arab countries, including the Palestinians.

Asked about his confidence in Obama, al-Faisal said, "I'll have confidence when I see things done on the ground, and President Obama can do something and gain the confidence and support of the Arab and Muslim nations by showing that he has done things on the ground and not simply expressed a wish for that."

If not, he said the Arab world's relationship with the United States is at stake.

"Popular sentiment, already America is at its lowest level in the history of its engagement with the Arab and Muslim world," he said. "In terms of government relations, that is something that will have to be decided by the leaderships in the Arab world and America, but it's not a pretty picture."