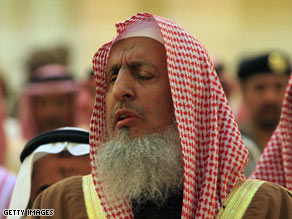 Saudi cleric Sheikh Abdul Aziz Al-Sheikh says it's OK for a girl age 10 or 12 to get married.

(CNN) -- The debate over the controversial practice of child marriage in Saudi Arabia was pushed back into the spotlight this week, with the kingdom's top cleric saying that it's OK for girls as young as 10 to wed.

"It is incorrect to say that it's not permitted to marry off girls who are 15 and younger," Sheikh Abdul Aziz Al-Sheikh, the kingdom's grand mufti, said in remarks quoted Wednesday in the regional Al-Hayat newspaper. "A girl aged 10 or 12 can be married. Those who think she's too young are wrong and they are being unfair to her."

The issue of child marriage has been a hot-button topic in the deeply conservative kingdom in recent weeks.

Late last month, a Saudi judge refused to annul the marriage of an 8-year-old girl to a 47-year-old man.

The judge, Sheikh Habib Abdallah al-Habib, rejected a petition from the girl's mother, whose lawyer said the marriage was arranged by her father to settle a debt with "a close friend." The judge required the girl's husband to sign a pledge that he would not have sex with her until she reaches puberty.

Al-Sheikh was asked during a Monday lecture about parents forcing their underage daughters to marry.

"We hear a lot in the media about the marriage of underage girls," he said, according to the newspaper. "We should know that Shariah law has not brought injustice to women."

Christoph Wilcke, a Saudi Arabia researcher for Human Rights Watch, recently told CNN that his organization has heard many other cases of child marriages.

"We've been hearing about these types of cases once every four or five months because the Saudi public is now able to express this kind of anger -- especially so when girls are traded off to older men," Wilcke said.

Wilcke explained that while Saudi ministries may make decisions designed to protect children, "It is still the religious establishment that holds sway in the courts, and in many realms beyond the court."

"The Human Rights Commission opposes child marriages in Saudi Arabia," al-Harithi said. "Child marriages violate international agreements that have been signed by Saudi Arabia and should not be allowed." He added that his organization has been able to intervene and stop at least one child marriage from taking place.

Wajeha al-Huwaider, co-founder of the Society of Defending Women's Rights in Saudi Arabia, told CNN last month that achieving human rights in the kingdom means standing against those who want to "keep us backward and in the dark ages."

She said the marriages cause girls to "lose their sense of security and safety. Also, it destroys their feeling of being loved and nurtured. It causes them a lifetime of psychological problems and severe depression."

The Saudi Ministry of Justice has made no public comment on the issue.