(CNN) -- Diplomats edged closer to finding a way to end the fighting in Gaza on Friday as the United States and Israel signed an agreement designed to stop arms smuggling into the Palestinian territory. 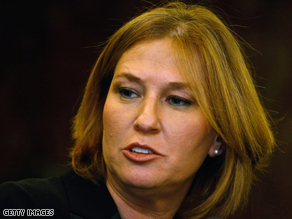 U.S. Secretary of State Condoleezza Rice and Israeli Foreign Minister Tzipi Livni signed a memorandum of understanding that calls for an international effort to stem the flow of weaponry and explosives.

The agreement outlines a plan to share information and provide technical assistance to stop the smuggling of arms to the militants.

The meeting in Washington was one of several diplomatic moves afoot to end the fighting between Israel and Hamas in Gaza.

The diplomatic moves came as Israel's offensive against Hamas militants continued, with Israeli airstrikes pounding the northern and southern sections of Gaza.

Watch more on the latest fighting in Gaza »

U.S. and Israeli diplomats said the agreement includes intelligence coordination to prevent arms from Iran from entering Gaza, maritime efforts to identify ships carrying weaponry, and the sharing of U.S. and European technologies to discover and prevent the use of weapons-smuggling tunnels.

Rice said the steps spelled out in the memorandum will "stem the flow of weapons and explosives into Gaza."

"The United States is reaching out to its partners as well. Together, the steps that we and other members of the international community can take will contribute to a durable cease-fire," said Rice, noting that "there must be an international consensus that Gaza never be used as a launching pad against Israeli cities."

Livni said that ending the fighting in Gaza won't be "achieved by agreements with terror, but with effective arrangements against it" -- a unified effort by the international community. She said a "durable" end to hostilities requires a stop to weapons smuggling into Gaza.

"We have agreed on a series of actions with regional and international players in order to complement Egyptian actions and end the flow of weapons to Gaza," Livni said. She said European nations and NATO would be helping with the anti-smuggling efforts.

The Bush administration has been consulting with the Barack Obama team about the memorandum of understanding and efforts to forge a cease-fire. Rice has spoken with President-elect Obama, incoming Secretary of State Hillary Clinton and incoming National Security Adviser James Jones.

Egypt has hosted peace talks with leaders from Israel and the Palestinian Authority, and has acted as an intermediary between Hamas and Israel.

Arab and regional diplomats and leaders also have been meeting to deal with the crisis, but there is no unified Arab stand.

The state of Qatar held an emergency summit Friday in an attempt to find a unified Arab voice on Gaza. The meeting brought together some regional leaders, including the presidents of Iran and Syria and the leader of Hamas, Khaled Meshaal.

Egypt, Saudi Arabia, Kuwait and the Palestinian Authority were not in attendance. They plan to attend the regular annual Arab League summit scheduled for next week in Kuwait devoted to Gaza.

Arab League foreign ministers were meeting in Kuwait City on Friday and were planning the groundwork for next week's meeting.

Also, U.N. Secretary-General Ban Ki-moon continued his trip through the region as part of the diplomatic effort to secure a truce. He has called for an immediate cease-fire between Hamas and Israel and said he is encouraged that the Egyptian government is trying to broker a truce.

He met with Israeli officials Thursday and condemned an Israeli strike that damaged the U.N. Relief and Works Agency's compound in Gaza City, sparked a massive fire and injured three people.

Once the fighting stops, the two sides can "discuss how to make this cease-fire durable and sustainable," he said.

CNN's Elise Labott and Caroline Faraj contributed to this report