(CNN) -- Children are bearing the brunt of the conflict in Gaza as the Israeli offensive to flush out Hamas fighters leaves youngsters battling indelible trauma while threatening the lives of newborns and their mothers, a senior aid official says. 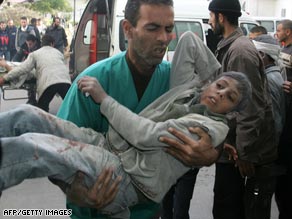 Palestinians carry a boy wounded in an Israeli military strike to hospital on January 14.

Ann Veneman, executive director of the United Nations' children body UNICEF, says too little is being done to protect Gaza's children, who account for half the territory's population, from the horrors of the latest conflict.

More than 320 children have been killed and 1,500 injured in Gaza since the current conflict began more than three weeks ago, she says, a situation she has described as tragic and unacceptable.

"They are the innocent victims," she told CNN in Johannesburg, South Africa, before the launch of UNICEF's annual "State of the World's Children" report.

Children are particularly vulnerable in Gaza because families are trapped in the conflict areas. "People cannot leave and be a refugee and find safe haven in another country," she said.

Because they cannot escape the constant violence, Veneman says, most Gaza kids are severely traumatized.

UNICEF is airing radio spots on the Gaza airwaves that advise parents on how to comfort their upset and terrified children. Also, UNICEF has teams on standby to offer psychological support to families.

Newborns and pregnant women in Gaza also are a concern, UNICEF says.

With hospitals and doctors already battling to cope with the injured, women and their newborns are not getting the medical attention they need. Inadequate medical supplies and severe shortages of food, water, diapers and formula worsen the already dire situation.