(CNN) -- Israel said Wednesday it may expel Venezuela's top diplomat from the country in a tit-for-tat gesture after the South American nation ordered the Israeli ambassador to leave over the increasingly bloody ground war in Gaza. 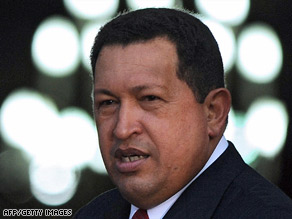 The decision on whether to expel Venezuela's charge d'affaires will be taken later Wednesday, said Yigal Palmor, the spokesman for the Israeli foreign ministry.

On Tuesday Venezuela expelled Israel's ambassador to Caracas and accused Israel of attempting to carry out "genocide" against the Palestinian people.

"In this tragic and indignant hour, the people of Venezuela manifest their unconditional solidarity with the heroic Palestinian people, share in the sadness that overcomes thousands of families through the loss of their loved ones, and extends to them a hand by affirming that the government of Venezuela will not rest until it sees those responsible for these criminal atrocities severely punished," the Venezuelan foreign minister said in a statement read by an anchor on state television.

The statement added that the government "condemns strongly the flagrant violations of international law" by Israel and "denounces their planned utilization of state terrorism."

"For the above-mentioned reasons, the government of Venezuela has decided to expel the ambassador of Israel and some of the personnel of the Israeli Embassy in Venezuela," it added.

"They are cowards," he said. "It's as though a boxing professional were to come here and challenge you to box. Well, how courageous! How courageous is the Israeli army!"

It said that Chavez "makes a fraternal call to the Jewish people throughout the world to oppose these criminal policies of the state of Israel that recall the worst pages of the history of the 20th century.

"With the genocide of the Palestinian people, the state of Israel will never be able to offer its people the perspective of a peace that is both necessary and long-lasting."

"I haven't heard the details yet, but you know the regime in Venezuela has been one of the few countries in the world that gives automatic support to the Iranian extremists, and it doesn't surprise me that they have affinity with groups like Hamas and Hezbollah," he told CNN.

He predicted that other countries would not follow suit, even in the Middle East.

"I think, even in the Muslim and Arab countries, there is a fair amount of understanding for what Israel has had to do here," he said.

All About Venezuela • Israel • Hugo Chavez