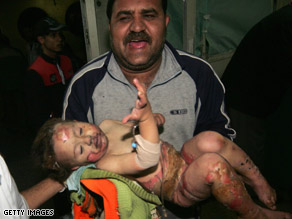 Word of health facilities being pushed to the limit came as Israel announced on Monday it was opening up border crossings to allow the flow of humanitarian goods into the Palestinian territory.

Watch the latest on the Israeli offensive »

"We've had a steady stream (of patients) every day, but the last 24 hours has (seen) about triple the number of cases," Fosse said late Sunday.

Fosse said that he estimated that about 30 percent of the casualties at Shifa Hospital on Sunday were children, both among the dead and wounded. The increase in casualties at Shifa followed Israel's ground incursion into Gaza, which it launched on Saturday night. Fosse said 50 patients were "severely wounded" when an Israeli air strike hit a food market in Gaza City.

Watch more about the victims of the conflict »

Most of the casualties are a result of the air strikes that preceded Saturday night's ground incursion. Shifa is the main hospital in Gaza City. Other hospitals were unable to treat the wounded because of a shortage of supplies and staff.

El-Sarraj told CNN on Sunday that the violence in Gaza is "the worst he has seen in his life" and said he believes that, as a result, half of the people in Gaza will suffer from post-traumatic stress disorder.

Watch more about the psychological impact of the conflict »

Meanwhile, Israel said Monday it will allow 80 trucks filled with humanitarian supplies to pass into Gaza. Jerusalem has been under intense international pressure to let the goods pass, because of shortages of food, medicines and fuel.

Trucks carrying food and medical supplies are expected go through the Kerem Shalom border crossing, while 222,000 liters of diesel fuel will pass through the Hahal Oz crossing, according to an Israeli army spokesman.

The announcement came after 25 trucks carrying aid and medical supplies were unable to pass through the Gaza-Egypt border at Rafah on Sunday, CNN's Karl Penhaul reported.

An official with the humanitarian group World Vision also confirmed that report, saying, "Unfortunately today, they closed the border, so no aid entered Gaza today."