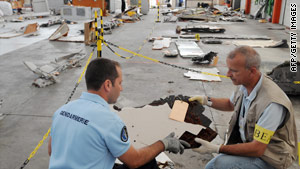 Air accident investigators have not managed to find out why Air France flight 447 came down.
STORY HIGHLIGHTS
RELATED TOPICS

(CNN) -- Air accident investigators are to resume the search for the flight data recorders from an Air France airliner that mysteriously crashed off Brazil six months ago, according to media reports Sunday.

Flight 447 went down in stormy weather in the Atlantic Ocean while flying from Rio de Janeiro, Brazil, to Charles de Gaulle Airport in Paris, France in June.

Investigators have not yet established the cause of the crash which killed all 228 passengers, and large parts of the plane -- including both flight recorders -- have never been found, despite an extensive search operation that included a French navy submarine.

Jean-Paul Troadec, director of the Investigation and Analysis Bureau, told reporters that a new search, approximately 1,000 kilometers (600 miles) off Brazil's northeast coast, will begin in February, according to Agence France-Presse.

The new underwater sweeps will last a maximum three months and involve sonar and robot submarines, he said.

Troadec was in Rio de Janeiro to speak to the relatives of the 58 Brazilians who were on board, AFP said. "We tried to convince the families that we are conducting the investigation with the full intention of getting to the truth," he said.

Troadec added that an upcoming report about the fatal crash contained "no surprises" but did set out "new details, notably in terms of safety recommendations."

Tests have already brought into question the performance of pitot tubes, which are used to measure the pressure exerted on the plane as it flies through the air, and are part of a system used to determine air speed.

Flight 447 sent out 24 automated error messages before it crashed that suggested the plane may have been flying too fast or too slow through the thunderstorms, officials have said.

The European Aviation Safety Agency (EASA) issued a directive in late August requiring airlines to replace pitot tubes manufactured by Thales Avionics on Airbus A330s and A340s. It said airlines should replace them with other Thales tubes and those manufactured by Goodrich.