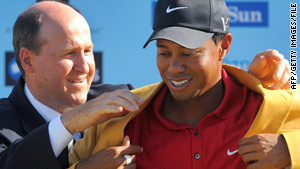 Tiger Woods dons the winner's jacket at the close of the Australian Masters in November.
STORY HIGHLIGHTS

London, England (CNN) -- A British court has granted Tiger Woods an injunction prohibiting the publication of pictures of him taken or obtained in certain circumstances.

The order prevents CNN saying what those circumstances are.

The High Court in London issued the injunction Thursday afternoon, said the Schillings law firm, which is representing Woods.

"For the avoidance of doubt, this order is not to be taken as an admission that any such photographs exist," Schillings said in a letter sent to legal departments of British publications.

The court document says anyone who violates the order may be held in contempt of court and may be fined, imprisoned or have assets seized.

The 33-year-old golfer, who tops the sport's world rankings, has been mired in controversy since he crashed his car outside his Florida mansion last month. The crash prompted authorities to cite him for careless driving and fine him $164.

Woods was not required to talk to police about the wreck and declined to speak with investigators on several occasions.

In the week after the crash, Woods apologized for "transgressions" that let his family down. On the same day, gossip magazine US Weekly published a report alleging that Woods had an affair with a 24-year-old cocktail waitress named Jaimee Grubbs.

"I have let my family down, and I regret those transgressions with all of my heart. I have not been true to my values and the behavior my family deserves," he said in a December 3 statement on his official Web site.

US Weekly's report followed a National Enquirer article before the crash that the athlete was having an affair with a New York nightclub hostess -- an assertion the hostess vigorously denied, according to The New York Post.