MADRID, Spain (CNN) -- The world may soon know for sure where Spanish poet and playwright Federico Garcia Lorca rests after fascists executed him in 1936 during Spain's Civil War. 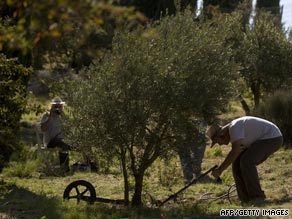 A team from the Andalucia Geophysics Institut at work in the Federico Garcia Lorca Park, Spain.

Officials in southern Spain Friday cleared the last legal hurdle to permit exhuming a mass grave site in a village near Granada where Lorca and some other Civil War victims are thought to be buried, CNN partner station CNN+ reported.

The area has been fenced off for weeks as scientists conducted preparatory work. Next Monday (October 19) they are due to erect a large tent over the site so that exhumation can be conducted confidentially, said Andalusia regional government justice councilor Begona Alvarez, CNN+ reported from Granada.

The potential exhumation of Lorca is part of a broader effort in Spain that already has resulted in various mass graves being dug up and could lead to thousands of other Spaniards still thought to be in mass graves.

Many were killed by right-wing forces loyal to General Francisco Franco, who won the three-year long Civil War, which began in 1936. Franco went on to rule Spain with an iron fist until his death in 1975.

For years, Lorca descendants have argued that Lorca -- whose poems and plays are widely studied at universities, including his "Poet in New York" -- should not be exhumed, mainly so that he would not be seen as more important than the many other Civil War victims thought to be in nearby mass graves.

In a statement earlier this month, Lorca descendants noted the complexity of the issue, because relatives of some others thought to be in the gravesite have requested their removal, identification, and permission to bury their remains in hometown cemeteries.

In their October 2 statement, six Lorca descendants reiterated their request that Lorca's presumed remains not be disturbed. But they also reserved the right to have them identified in the future, and they asked authorities to designate the current mass grave site as a legally defined resting place.

It is already a park, in the village of Alfacar, because that's where it's long been thought that Lorca, captured by Franco loyalists early in the Civil War, was shot dead, according to historians who interviewed witnesses and local villagers.

Relatives of a bullfighter, Francisco Galadi, a tax inspector, Fermin Roldan and a restaurant owner, Miguel Cobo, have asked authorities to identify their remains, officials said.

But in the case of teacher Dioscoro Galindo, also executed and thought to be in the mass grave, two of his nieces are at odds over whether to exhume him or not, so officials will not act until that family reaches a common position, CNN+ reported.

Irish author Ian Gibson, who is a leading scholar on Lorca, told CNN last year, "Lorca is the most famous victim of the Civil War. I think Lorca can be a symbol for reconciliation of the Civil War."

Spanish parliament in 2007, led by the Socialist government, passed a law condemning Franco's dictatorship and calling on town halls to fund initiatives to unearth mass graves.

It also sought to honor Roman Catholic clergy and others executed by the losing side in the war, the forces loyal to the leftist Republican government.

Since then, some prominent statutes of Franco have been removed from public view, but others remain, along with numerous streets in Spain named for Franco or his top generals.

More recently, there have been efforts to try to exhume presumed Franco victims from a mass grave at his large mausoleum site, the Valley of the Fallen, just outside of Madrid, where Franco himself is buried.

All About Spain • Poetry