By Claire Barthelemy
For CNN

(CNN) -- Shortly after McDonald's celebrated its 30-year presence in France, the fast-food chain is conquering one of the country's most valued cultural institutions --the Louvre. 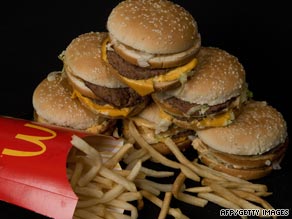 McDonalds' burgers and fries will be available under the inverted glass pyramid of the Louvre.

The restaurant will be serving its fast burgers in the Carrousel du Louvre, an underground shopping mall which lies under the main entrance of the museum and which still contains an ancient wall that was discovered during construction works.

McDonald's' plans seem to have caused more media attention abroad than in France, but for some French outlets, the idea of combining fast food and ancient art is stomach churning.

The Parisian Web site "Louvre pour tous" (Louvre for everyone) describes McDonald's' decision to open a restaurant in the prestigious museum as "bad taste" and blamed the Louvre's directors for failing to prevent what could result in "fragrances of fries drifting under Mona Lisa's nose".

A spokeswoman for the museum told CNN it was not their decision and declined to comment further on the issue.

The Carrousel du Louvre mall is managed by Unibail-Rodamco, Europe's largest property company, and not the museum itself.

The mall, which is situated next to the most visited museum in the world, counts 8.3 million visitors a year and enjoyed a total gross sales of $75 million in 2008.

Le Parisien, a daily newspaper described the difference between McDonald's and the Louvre by comparing Ronald McDonald, the restaurant's clown character, to Venus de Milo, the famous ancient Greek statue of Aphrodite, which is on display at the Louvre.

Should McDonald's be in the Louvre? Tell us what you think in the Soundoff box below.

Museum lovers in France are shocked about the news, but not surprised.

"Museums have to offer services like restaurants and boutiques, it's completely normal," Jean-Michel Raingeard, President of the Federation of French Friends of Museums told CNN.

What worries him, however, is the choice of shops.

"Museum directors seem to care more about the number of people they attract rather than the quality of people. Should a museum be a museum or an amusement park?" asks Jean Michel Raingeard, who is also the European vice president for The World Federation of Friends of Museums.

McDonald's sees the opening of its new restaurant next to the home of Mona Lisa as something completely normal.

"There are already many other restaurants in the mall, so we will only be one of the many restaurants that offer visitors their products." says a spokeswoman for McDonald's in France. "There's even a Starbucks," she added.

Criticism, though fierce, has not been successful: the construction work will start soon and the restaurant should be open "by the end of the year."

In spite of its location, the menu will very likely stay the same. "McDonald's functions the same way in all of France, so there will probably be no special menus," the spokeswoman said.