GDANSK, Poland (CNN) -- At least 20 world leaders gathered Tuesday in Poland to commemorate the start of World War II 70 years ago -- a conflict in which 6 million Poles died. 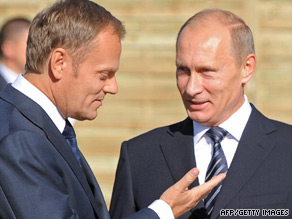 Germany's pre-dawn invasion began when the battleship Schleswig-Holstein fired on the Westerplatte military base in Gdansk harbor on September 1, 1939.

The attack set off a chain of events that eventually embroiled all of the world's major powers in the war.

Polish World War II veteran Romuald Bardzynski, said: "I was a soldier on the front, a corporal in the cavalry. On September 16 I was injured. We were fighting against the Germans but I was shot by the Soviets. I was wounded three times.

"But the worst thing for me is the land in eastern Poland which was occupied by the Soviets ... and to this day we cannot come to terms with it.

"The Russians took half of Poland, and after the Polish fighting on all the world war fronts it turns out that after the war Poland was 77 sq km smaller! This was a great loss for us."

Eugeniusz Cydzik, another Polish veteran, added: "We have to talk about what happened ... to make sure it doesn't happen again.

"The young generations, like the boy scouts for example, are continuing the memory of those who perished. We take them to the sites of the battles. We even found munitions from the 1914 [war]."

Leaders from many of the warring nations were in Gdansk on Tuesday for a wreath-laying ceremony at the Cemetery of Defenders at Westerplatte, with commemoration speeches to take place in front of the Westerplatte memorial.

Among those attending were German Chancellor Angela Merkel and Russian Prime Minister Vladimir Putin -- leaders of the two nations that once held power over Poland.

Merkel said on Tuesday that her country unleashed "endless suffering" by starting the war, but also recalled the fate of ethnic Germans expelled at the end of the conflict.

"But the expulsion of well over 12 million people from areas of the former Germany and present-day Poland is of course an injustice. This must also be recognized," she said.

Poland first came under German influence at the start of the war, but was later dominated for about 40 years by the Russian-led Soviet Union as the Cold War between East and West settled in after World War II.

A dwindling group of veterans, now in their 80s and 90s, was also due to attend.

Later on Tuesday, many of the world's leading classical musicians, playing together as the World Orchestra for Peace, performed a concert in Krakow to mark the 70th anniversary.

Watch highlights of the performance »